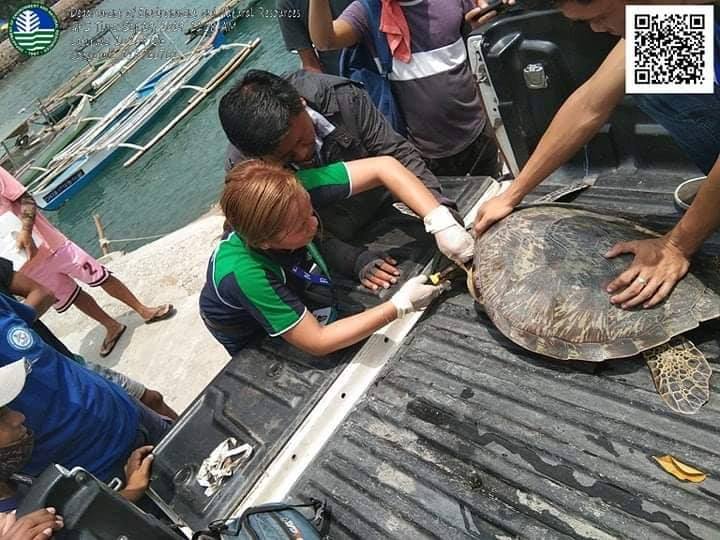 A personnel of the Argao Community Environment and Natural Resources Office places a tag on each of the two rescued green sea turtles. | DENR photo

This development was posted on the Facebook page of the Department of Environment and Natural Resources (DENR) Region 7 on Monday, November 4, 2019.

The two green sea turtles were said to be trapped in a fisherman’s net near the shoreline.

After the physical examination, CENRO staff together with the Naga City environment and natural resources office tagged the pawikan with code number PH 1445K and PH 1448K.

The two green sea turtles were later released it in the shoreline of Barangay Poblacion, City of Naga.

Last July 10, a lifeless adult green sea turtle was discovered in the waters off Barangay San Vicente, Olango Island. Police said the green sea turtle sustained a wound on its neck which was likely caused by a spear gun.

Green sea turtles are caught for food since turtle stew has drawn many to informal eateries in Pasil, Cebu City.

The green sea turtle, which is one of the largest sea turtles, has been declared as endangered, according to World Wildlife Fund.

It is the only sea turtle that eats seagrass. Green turtles are threatened by overharvesting of their eggs, hunting of adults, being caught in fishing gear and loss of nesting beach sites.

The DENR-7 then appealed to the public to help protect all wildlife and endangered species, especially the sea turtles. /bmjo

Read Next
Fire burns down eatery, damages two other establishments in Mandaue City