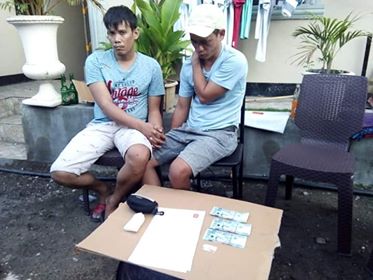 The suspects, Cesario Maitim Jr., 36, and Retchie Comiso, 40, were collared in Barangay Mohon of Talisay City by operatives from the Centro Police Station of the Mandaue City Police Office during a pursuit operation.

Police Major Ramil Morpos, chief of the Centro Police, said around 100 grams of suspected shabu estimated to be worth P700,000 were confiscated from the two suspects.

Morpos said they learned of Maitim’s and Comiso’s alleged drug trade after they arrested a jeepney passenger in possession of few packets of shabu at a police checkpoint in Barangay Guizo, Mandaue City past midnight on Saturday.

The arrested person pointed to Maitim and Comiso as his sources of the drug.

Morpos said they would now begin an investigation to trace the source of the drugs distributed by Maitim and Comiso./elb