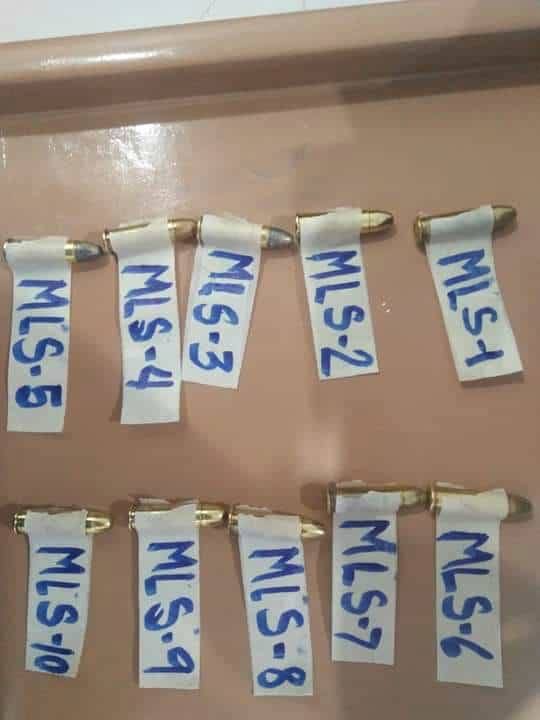 Police at the Compostela Police Station label the bullets confiscated from security guard, Mark Lloyd Sajolna, as evidence for an illegal possession of ammunition case to be filed against the security guard. | Contributed photo

CEBU CITY, Philippines — A 40-year-old “drunk” security guard was caught stealing and drinking beer inside a convenience store at past midnight of November 17 in Compostela town in northern Cebu.

Mark Lloyd Sajolna of  Barangay Tabok of Liloan town claimed that he was too drunk to know what he was doing and that he did not know that he was already inside the convenience store taking and drinking beer from the store’s refrigerator, said Police Staff Sergeant Fedilito Jopia of the Compostela Police Station in a phone interview with CDN Digital.

Sajolna told police that he had come from a drinking session with friends after he got off work as a security guard of a company in Mandaue City.

He said he did not remember how he got inside the convenience store.

Jopia, however, said that they would check on Sajolna’s alibi and look at the footage of the closed circuit television (CCTV) in the store and the nearby establishments

When she went inside to check, she found a drunk Sajolna with 3 empty bottles of beer and bottles of an energy drink at his feet near the store’s refrigerator.

She then arrested Sajolna, handcuffed him, and called police.

She then turned Sajolna over to them when they arrived at the convenience store.

Sajolna told police that the bullets were for his service firearm that he left at the company that he was working for.

Sajolna was detained at the Compostela Police Station pending the filing of burglary charges against him.

Jopia also said that they were also considering filing charges of illegal possession of ammunition against Sajolna./dbs