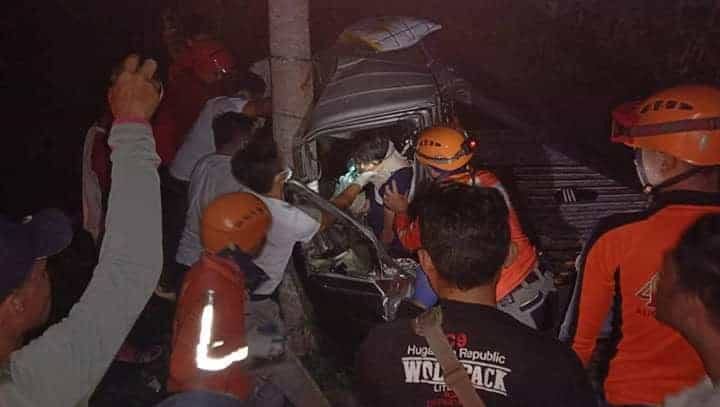 Rescue personnel work to safely remove the driver, Dashiell Antipuesto, from the wrecked pickup type multicab after it crashed on a tree in Barangay Busay, Cebu City at past 2 a.m. on November 19.| CDN digital file photo — Paul Lauro

CEBU CITY, Philippines — The driver of the multicab that figured in a fatal accident at the Transcentral Highway in Barangay Busay, Cebu City, today, November 19, 2019, is under hospital arrest.

Police Major Dindo Alaras, Mabolo Police Station chief, said that he had already assigned a police officer to secure the room of the driver identified as Dashiell Antipuesto, 25, of Barangay Hipodromo, Cebu City.

As of press time, Antipuesto is in critical condition at a private hospital in Cebu City.

Despite her condition, Alaras said she committed offenses that she would eventually face.

Alaras was referring to the 2 a.m. Busay accident where Antipuesto, who was driving her multicab with six of her friends onboard, crashed into a tree as she negotiated a curved portion of the road in the area.

Alaras said Talamor and the five others at the back of the pickup type multicab, were thrown off the vehicle onto the road.

According to police investigation, Alaras said that Antipuesto and her friends were having a drinking session before they went up to the Tops View Deck in Barangay Busay.

While there, the group allegedly had another round of drinks before heading back down from Busay.

Alaras said Antipuesto violated the Land Transportation Office’s rule banning passengers to ride at the portion of the motor vehicle used for freight or cargo including that of the back portion of a multicab.

When sought for comment, Director Victor Caindec, Land Transportation Office in Central Visayas chief, said that they had apprehended more than 500 drivers, who violated the new rule since it took effect last September 18.

“We have apprehended more than 500 violators since the memorandum from the Assistant Secretary was released on September 18, 2019. We have deputized more than 500 PNP personnel across Region 7. We are conducting daily checkpoints. We have worked closely with media to bring to the general public this concern, even with all the bashing we get,” Caindec said in a text message sent to CDN Digital.

Caindec claimed that there apprehension rate had grown 246 percent as compared to the same period last year.

“What else do we have to do? The issue of people not following the law is a societal problem, not enforcement. We seem to have lost our respect for the law unless we are caught,” Caindec said.

With Busay accident, Alaras said he had directed police officers to also patrol the areas of their responsibility which are known places for drinking liquor.

He also reminded motorists, drivers of vehicles to always be responsible, avoid drinking if they would be the designated drivers and to be mindful of their passengers’ safety.

Alaras also said they would file charges of reckless imprudence resulting to homicide and multiple injuries against the multicab driver, Antipuesto./dbs