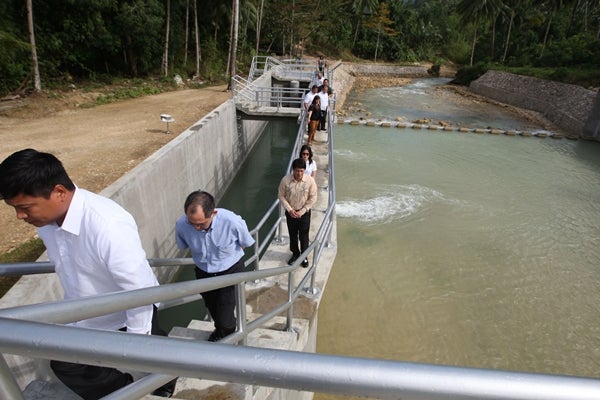 CEBU CITY, Philippines — The Capitol will take actions against the Manila Water Consortium Inc. as the 90-day ultimatum for the firm to cure the breaches in their joint investment agreement (JIA) lapses this Tuesday, November 27.

Governor Gwendolyn Garcia said the province “will henceforth proceed to take the appropriate measures, consistent with the applicable laws and the JIA provisions, to protect its interest and that of the Cebuanos.”

Among the options at hand include the cancellation of the JIA.

The Province, in 2012, inked a JIA with Manila Water for a P702-million project for the development of water supply facilities, tapping the surface water of Luyang River in Carmen town, northern Cebu. The JIA was a 49-51 sharing for Cebu Province and the Manila Water, respectively.

Last August 29, 2019, Garcia issued a Notice of Breach to the Consortium as her consultants pointed out five alleged “unauthorized changes” in the terms of the JIA.

These breaches include the increase in the Capital Expenditure (Capex) from P702 million to P1.003 billion; increase of tariff rate from P13.95 per cubic meter to P24.59 per cubic meter; decrease of the projected internal rate of return from 19.23 percent to 12.30 percent; non-remittance of the province’s receivables; and the plowing back of the Capitol’s earned revenues to the Capex of the project.

The governor then gave the Consortium 90 days to cure the breaches.

In an October 4, 2019 letter-answer, Manila Water Consortium President Virgilio Rivera Jr. said increasing the Capex was a “unanimous decision” of the board of directors of the Company to participate in the Metropolitan Cebu Water District’s (MCWD) invitation to bid for a bulk water supply project in 2013.

“The Capex amount was used to build the facilities necessary to deliver on the Company’s obligation under the MCWD Bulk Water Supply Contract which contract was not contemplated in 2012 when the original business plan was agreed,” Rivera explained.

“The increase in Capex was unanimously approved by the board of directors of the company as early as October 17, 2013, together with the decision to participate in MCWD’s bidding for its bulk water supply project,” Rivera added.

Currently, the JIA project supplies MCWD with at least 35 million liters of water per day.

Rivera added it was MCWD that determined the P24.59 new tariff rate.

Garcia, however, did not accept Rivera’s explanation and insisted that the consortium’s reply “has not squarely addressed” the issues pointed out in the Notice of Breach.

“While you have repeatedly mentioned that the [changes] were unanimously approved by the members of the Board of Directors of the JICO, you have not attached a copy of the said resolution. Being such, it is presumed there is none,” Garcia said in a November 7, 2019-letter reply to the Consortium.

“Premises considered, I find your said explanation, as contained in your October 4, 2019 letter-answer, to be unsatisfactory. Hence, the same is denied f0r lack of factual and legal basis,” the governor added. /elb

Read Next
American figures in road accident in Carmen town, dies of heart attack in hospital