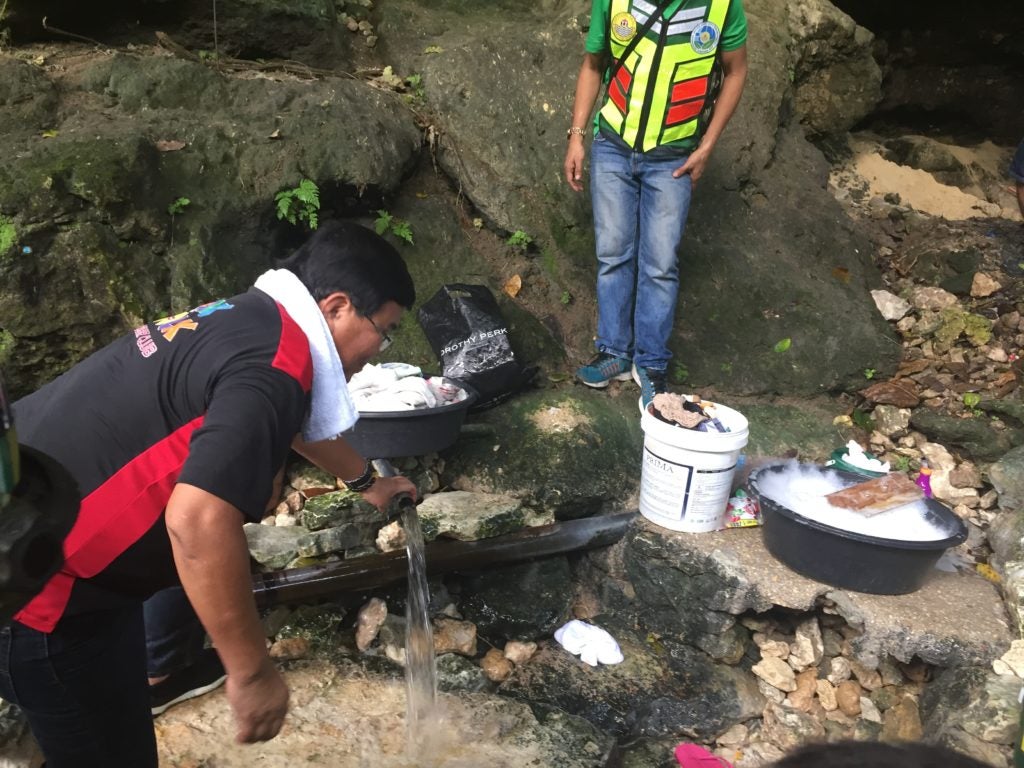 Cebu City Mayor Edgardo Labella tastes the spring water in Sitio Tubod, Barangay Bulacao, which is the source of the Bulacao River, in a visit to the water source during the massive Bulacao River cleanup that is jointly undertaken by the cities of Cebu and Talisay on Nov. 29, 2019. | CDND Photo/ Delta Dyrecka Letigio

TALISAY CITY, Cebu, Philippines — The Bulacao Spring is an under-tapped source of water for the city that should be considered and protected.

This was the pronouncement of Mayor Edgardo Labella after he visited the source of the Bulacao River, a spring inside a cave at the mountainous Sitio Tubod in Barangay Bulacao, Cebu City.

The spring flows all year round and the barangay has tapped it by installing a plumbing system that brings the water to the lower ground. Local residents say the spring is potable as they can drink from it directly.

Labella has tried the springwater as well and claimed that it tasted cool and fresh and was good enough to drink.

This prompted the mayor to consider the springwater as another source of water that can supply the city and the nearby local government units (LGUs), which have been affected by the water crisis.

“I will have the Water Advisory Committee look into this spring. We have a clean source of water and there is really water on the island of Cebu. It’s just a matter of tapping them,” said Labella.

The mayor said he will have the spring studied to find out how it can be used to ease the water shortage now experienced in many parts of Metro Cebu, largely due to climate change and the saltwater and nitrate intrusion into groundwater wells.

Labella added that the clean water from the spring is a reminder that the Bulacao River, while now heavy polluted, once harbored life and can still be brought back to life.

He said this should be the new goal of Cebu City and Talisay City: to rehabilitate the river so life can finally grow on it again.

The Department of Environment and Natural Resources (DENR) has categorized the 11-kilometer Bulacao River, which serves as a boundary between the cities of Cebu and Talisay, as a category C river, which means that it is no longer safe for swimming and drinking, and is biologically dead.

Labella said that for as long as the spring still produces clean and safe water, there is always hope to revive the river.

“We should never stop cleaning, rehabilitating the Bulacao River until fishes swim again in its waters,” said the mayor./elb