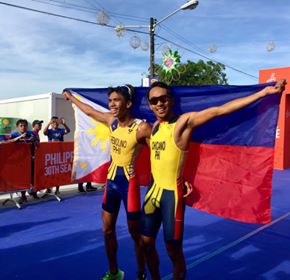 Remolino, from Talisay City,  was first out of the water but was engaged by Chicano in a neck-to-neck battle in the bike and run sections of the race.

Remolino clocked one hour, 55 minutes and three seconds (1:55:03) while Chicano, of Olongapo City, gave the Philippines its first gold medal after clocking 1:53:26.

Salvaging the bronze medal was Indonesia’s Muhammad Ahlul Firman, who crossed the finish line with a time of 1:57:10. /elb