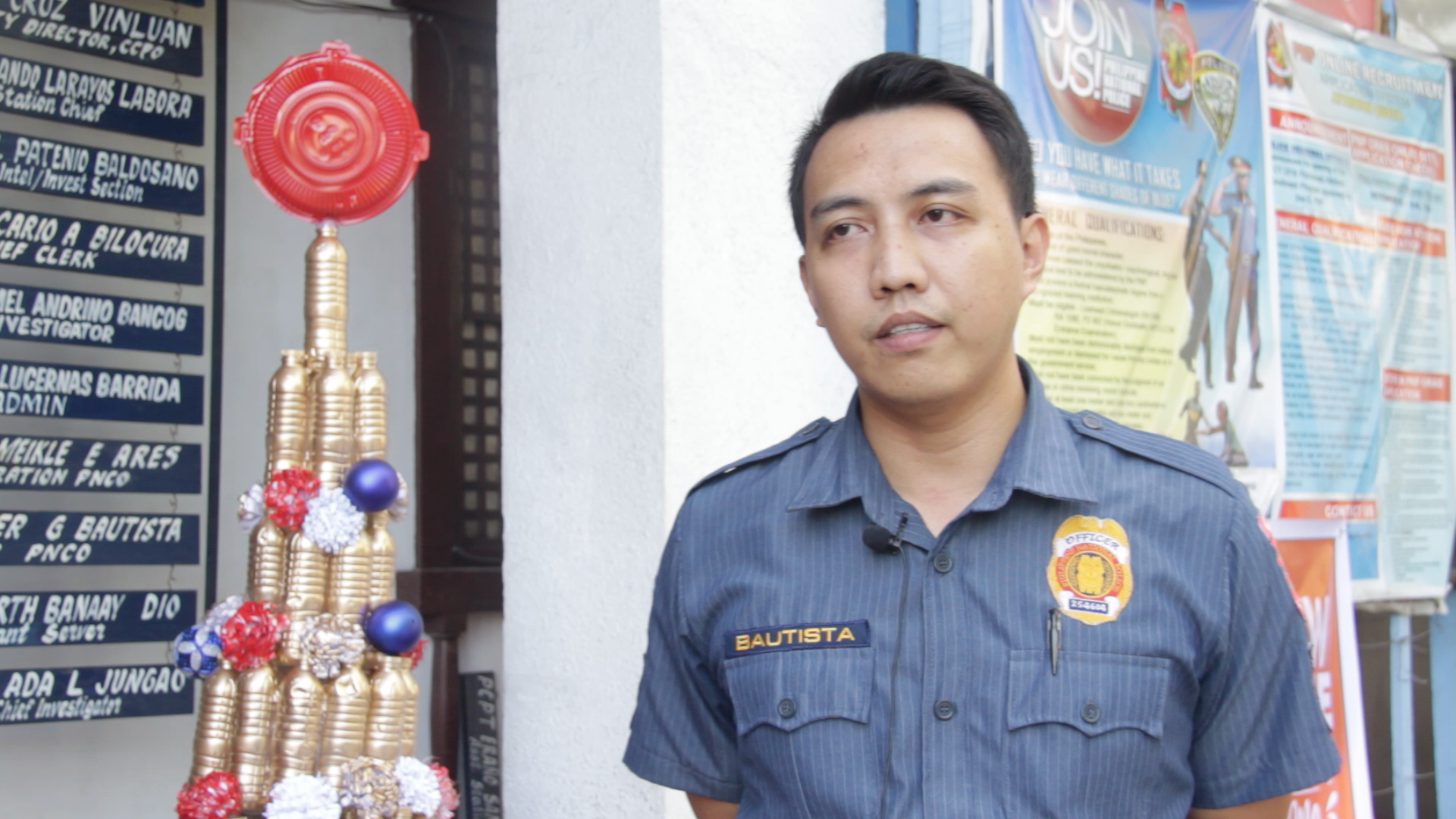 Police Corporal Oliver Bautista, community relations head of Parian Police Station, leads the creation of the gold Christmas tree that is displayed along with 19 other trees made by various police stations under the Cebu City Police Officer. | CDND Photo / Raul Tabanao

But this time, his eyes are not set on finding the next illegal drug trader.

His mission: find more disposable plastic bottles that he and his team can use to make their Christmas tree in time for the Christmas tree display organized by the Cebu City Police Office (CCPO).

Inside the small, dark and humid storage room of Parian Police Station where he is assigned as police community relations head, Bautista turned tables and rummaged through sacks of what-nots to look for empty water bottles.

Feeling triumphant that he was able to find what he thinks was a considerable amount of plastic bottles, he hurried back to the Parian Police Station’s main office and proudly announced to his fellow police officers, “O! Makahimo na gyud ta og Christmas tree.”

(Here are the bottles! We can finally make our Christmas tree!)

But his fellow officers told him that they would need more bottles in order to build the Christmas tree that they conceptualized to be in the color of royalty: gold.

So Bautista did what many thought he will not do: get out of the station and check trash cans to find more disposable water bottles.

When Police Colonel Geovanie Maines, officer-in-charge of CCPO, announced on September 2019 that there will be a Christmas tree-making contest for all stations under CCPO, Bautista was assigned by Police Major Armando Labora, chief of Parian Police, to spearhead the creation of the station’s Christmas tree.

The general instruction was to build Christmas trees made of recyclable materials.

Admittedly, Bautista says it was their first time to make a Christmas tree from scratch.

But he did not think that it would be a challenge to do so.

He was confident that his female colleagues will also help him with the  decorating task.

As community relations head, he also had experience in decorating their police station. 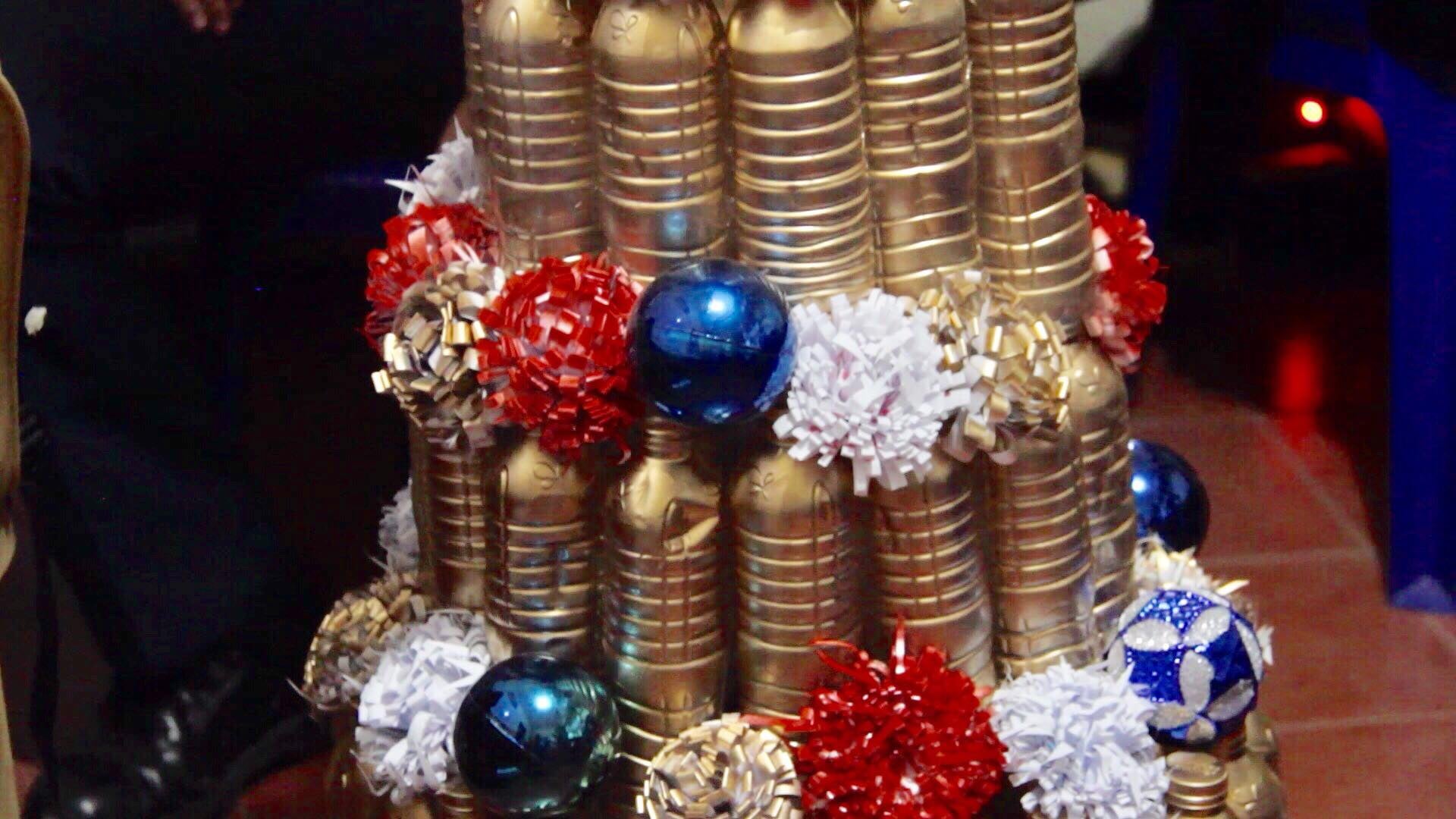 The idea of a Christmas tree-making contest was born out of nostalgia, according to Police Lieutenant Colonel Clark Arriola, spokesperson of CCPO.

Growing up, Arriola says he always felt the Christmas spirit because of the lights, decor and the Christmas trees displayed in malls, parks and houses.

Unfortunately, Arriola says the warm and festive spirit is not as evident in the previous years that Christmas has been celebrated in Cebu.

(These days, we don’t see much of these displays. You don’t have that strong feeling that it’s already Christmas.)

Determined to bring back the festive spirit of Christmas, Arriola thought of the Christmas tree-making activity.

The idea is to have the police stations under CCPO and the offices belonging to the main CCPO office to participate in the contest.

The general rule: create Christmas trees made of recyclable materials that will showcase the creativity of each police station.

Since this is the first time for CCPO to hold such an activity, Arriola says it would be better to include an environmental cause with it.

To encourage each station to create beautiful masterpieces, Arriola says certificates and cash prizes will be given to police stations with outstanding Christmas trees during the judging day which will happen on December 10.

The main winner will receive a cash prize amounting to P10,000.

Although police stations are not the first in mind for people to visit when they want to see a Christmas tree, Arriola says the idea served as a challenge for police officers to create a tree that will symbolize the season.

It is also one way of bringing the people to the CCPO and highlight the fact that is not just a place where law offenders are imprisoned.

Since November, shortly after the commemoration of All Saint’s Day and All Souls’ Day, police stations have been on the move in conceptualizing their themes and in gathering materials for their trees.

Just like police work, the stations are serious about coming up with good-looking Christmas trees.

For Bautista and his team at the Parian Police Station, the planning part was quite easy as it only involved searching online for design inspirations.

The police officer says they decided to use empty water bottles as they were easy materials.

Or so they thought.

As it turned out, Bautista ended up scavenging water bottles in trash bin in houses and establishments near their station. 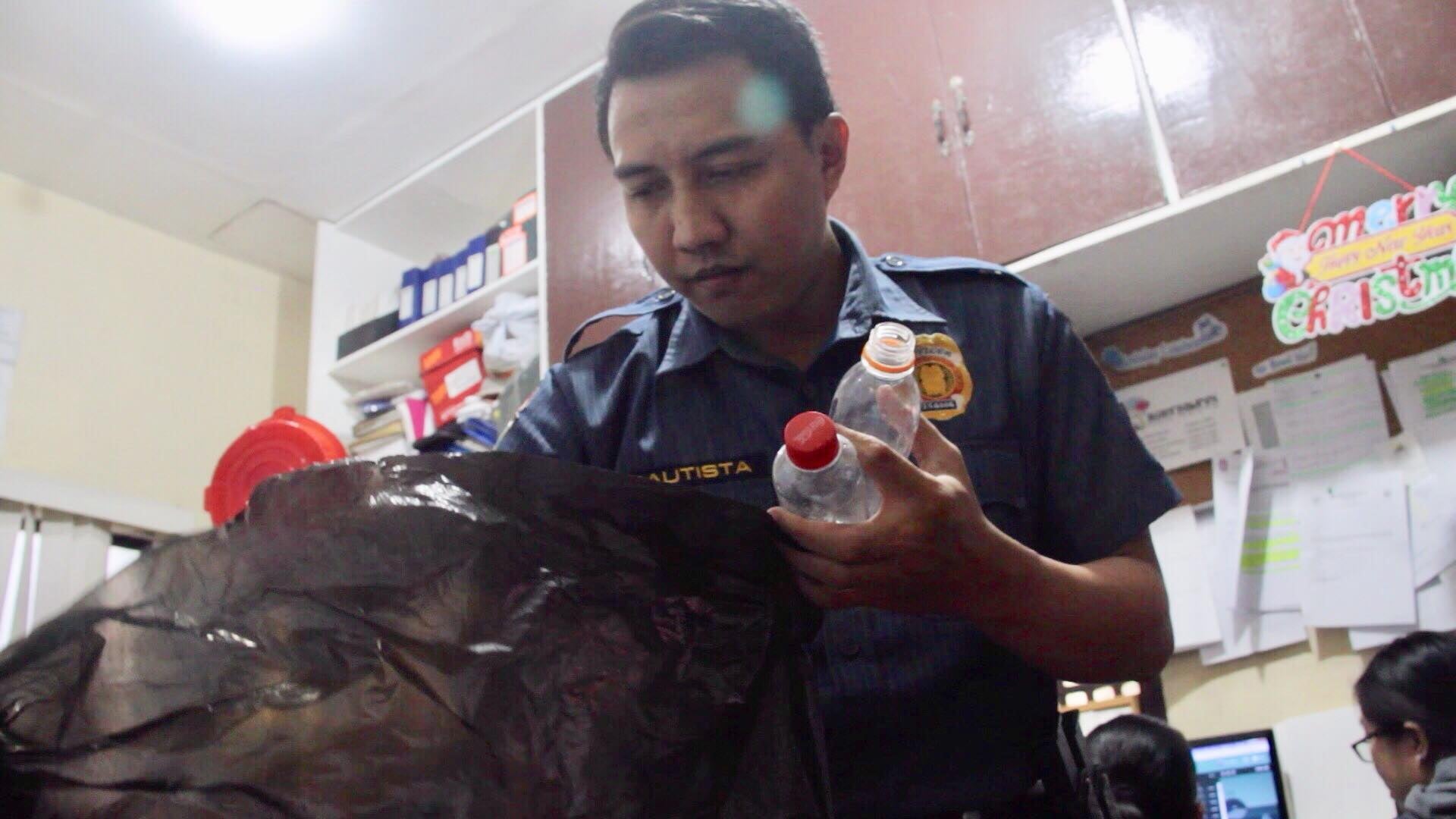 Making their first ever Christmas tree is serious work for Police Corporal Oliver Bautista and his team at the Parian Police Station. | CDND Photo / Raul Tabanao

On November 28, Thursday, Bautista came back to the station later with a black plastic bag full of water bottles.

He was sweating from the heat, exhausted and annoyed.

At the station, he was greeted by colleagues who teased him for his zealousness in finishing the task.

But a great team knows how to reward a hardworking member. Before the end of the day, they were thanking Bautista for his commitment.

The water bottles were formed in a triangular shape, standing at an estimated heigh of four feet.

Later, the bottles were painted with gold, which Bautista said makes their tree stand out as they no longer need to use Christmas lights to make the tree sparkle.

The team is strictly following the guidelines of using only recyclable materials.

Instead of ready-made flower decor, Bautista’s female colleagues made them out of scratch sheets of paper which they then used to adorn the tree.

It took them three days, from November 28 to November 30, to finish the tree.

Making the tree has since become the most enjoyable activity that Bautista and his colleagues at the Parian Police Station has done together this year, 2019.

Without realizing it, Bautista says he felt it was already Christmas Day after spending three days of making the tree with his colleagues.

Parian Police Station’s gold Christmas tree, a product of teamwork and creativity, is displayed at Camp Sotero Cabahug which is located along Gorordo Avenue in Cebu City.

The public can view at least 20 Christmas trees inside the CCPO headquarters until December 10 after which the trees will be brought back to their respective offices and police stations. At the CCPO’s Christmas tree display, the public can witness how police officers dedicated time, effort and recycled materials to create festive trees which symbolize the values of sharing, loving and caring.

It is easy for the public to have a negative impression of the police.

After all, they practice a profession that is often attached to the words “crimes” and “drugs.”

These are words which can be scary to many noting the number of people who are reported killed in the presence of the police.

This holiday season, the police force of Cebu City is working on letting the public see that they are not just there to curb crimes or capture the bad guys.

They can also be Santa’s elves ready to make beautiful trees to put smiles on everyone’s faces. / celr

Read Next
Cebu City Hall to light 3 Christmas trees this year, but for only 4 hours each night