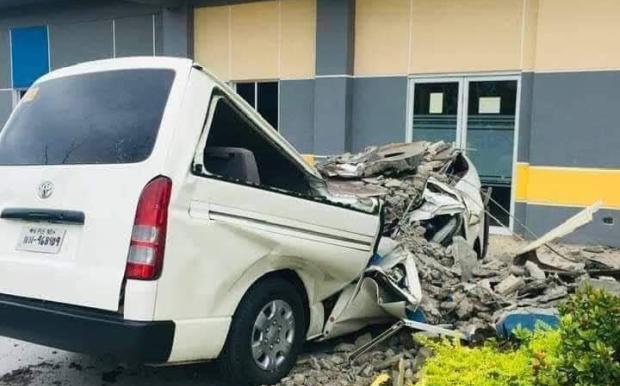 A parked vehicle was crushed by falling debris at the St. Benedict Hospital in Matanao, Davao del Sur, during a magnitude 6.9 quake that rocked parts of Mindanao on Sunday, Dec. 15, 2019. PHOTO (Photo by JUN CABILES / Inquirer Mindanao)

A strong earthquake rocked Davao del Sur and surrounding provinces on Sunday afternoon, the strongest after a series of quakes that shook roughly the same area in Mindanao in October.

Reports as of early Sunday evening said the quake caused two buildings in Padada town, Davao del Sur, to collapse, and a 6-year-old girl in another town was the initial fatality reported so far.

The Philippine Institute of Volcanology and Seismology (Phivolcs) placed the epicenter of the magnitude 6.9 quake, west of Matanao, which had been spared from October’s quakes.

The quake, which struck around 2 p.m., was tectonic in origin, and had a shallow depth of focus at only 3 km, causing the temblor to be felt more at the surface.

Several intensities were recorded across Davao del Sur and nearby provinces. The strongest, at Intensity 7, was reported in Davao del Sur in the towns of Matanao and Magsaysay.

The quake was also felt in Davao City, in the provinces of Bukidnon, Sarangani and the two Cotabato provinces, and as far as the cities of Dipolog and Cagayan de Oro in the northern part of Mindanao.

Hours after the quake, the Davao del Sur public information office confirmed the death of Cherbelchen Imgador, 6, of Asinan village in Matanao.

According to the municipal mayor, Vincent Fernandez, Imgador was hit by a wall that fell in her home.

In Padada, two buildings and the water reservoir that used to tower over the town’s public market collapsed.

Rescuers at the three-story shopping center Southern Trade, one of the collapsed buildings, escorted four people there to safety, including an elderly, but were searching for more—including shoppers as well as the building’s employees—in the rubble. 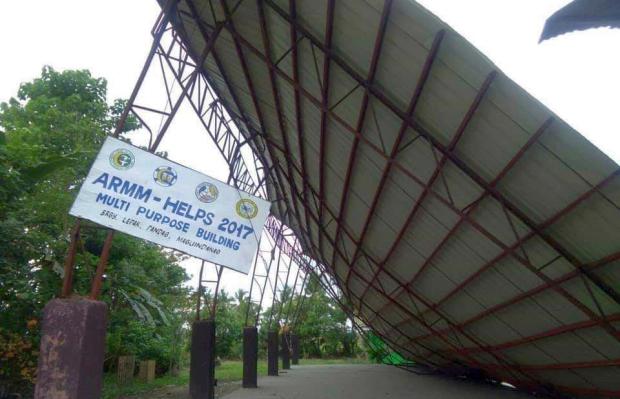 Davao del Sur Gov. Douglas Cagas and Padada town disaster risk reduction officer Luke Cadoyas appealed for help as they lacked the equipment and personnel to rescue those trapped in the collapsed building. Large cracks were seen on the town’s streets, particularly the road leading to the market.

Residents offered help to rescue several vendors who were pinned down by the fallen wall.

As of Sunday afternoon, 87 aftershocks had been recorded — the strongest at magnitudes 5.2 and 4.0, near the epicenter.

Despite the strong temblor, no tsunami warning had been issued, said Phivolcs director Renato Solidum, since the quake was inland.

The US Geological Survey and the Pacific Tsunami Warning Center said there was no threat of a tsunami.

Anthony Allada, public information officer of Magsaysay, in Davao del Sur, said 14 people were injured but none of them seriously.

Roads and buildings, including the local government office, were damaged, and power was out, he said.

Radio station dzMM reported that power was out in General Santos City, where patients at a hospital were being evacuated.

“The Mindanao grid remains intact as there are no reports of damage to transmission facilities in Davao del Sur and nearby areas,” NGCP, said in a statement, adding that the reported blackout in Magsaysay and other areas could have been caused by problems at the level of the electric cooperatives.

Duterte OK, back to sleep

President Duterte was in his hometown of Davao City when the quake struck.

“The President is OK. He went back to sleep after the quake,” Brig. Gen. Jose Eriel Niembra, commander of the Presidential Security Group, said in a text message to reporters.

Presidential spokesperson Salvador Panelo said Mr. Duterte was at home with his youngest daughter, Kitty, when the quake struck.

The President’s partner, Honeylet Avanceña, was returning home “when the ground rumbled and moved,” Panelo said.

“She said the car she was riding was swaying. They are unhurt,” he said.

The Mahayahay Bridge in Davao City was closed off to vehicles following the quake which registered at Intensity 5 in the city.

Local officials in Davao City and elsewhere also suspended classes in all levels.The Civil Aviation Authority of the Philippines (CAAP) reported on Sunday that the nine airports in Mindanao remain operational.

It also reported no damage in the airports in Laguindingan, Cotabato, Butuan, Surigao, Pagadian and Mati.

On the other hand, some buildings were damaged at Davao (Francisco Bangoy) International Airport, the CAAP said.

“[The] recent aftershock resulted [in] cracks on the ground near the passenger boarding bridge and international baggage buildup area. Still verifying level of damage,” it said in its report.

The latest temblor follows about a month after the series of powerful quakes in October that hit roughly the same area in Mindanao.

The third, which struck on Oct. 29, was the strongest of three temblors, recorded at magnitude 6.6. The last earthquake to hit Mindanao before Sunday’s temblor was the 5.5-magnitude quake of Nov. 1.

Some two dozen people were killed by that series of quakes and the landslides it had caused.