Bulls rally from 18 down to beat Wizards in overtime 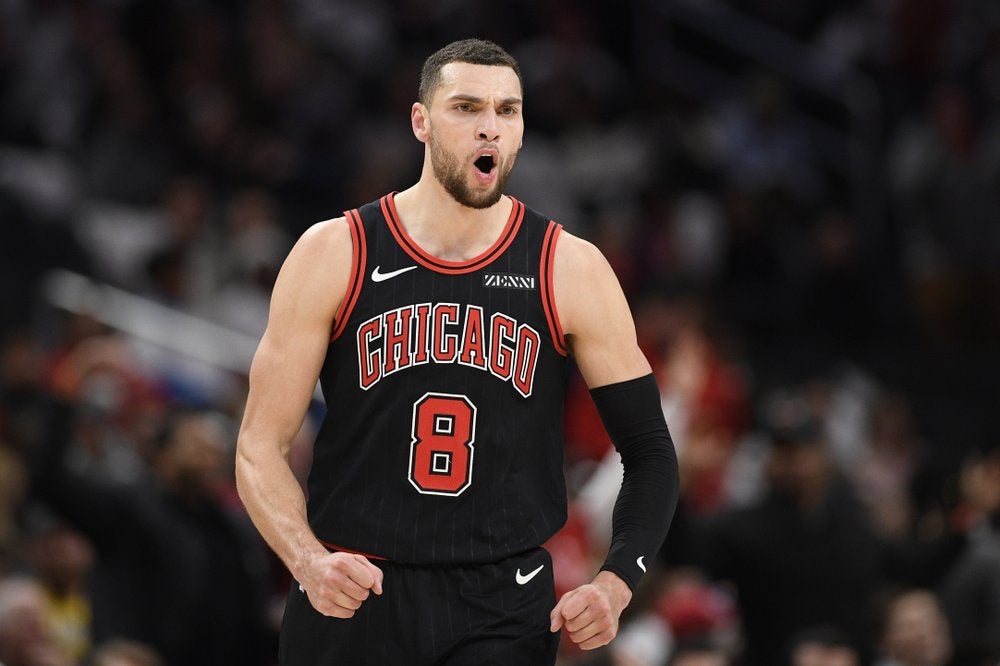 Chicago Bulls guard Zach LaVine (8) reacts after he hit a 3-point basket during the second half the team’s NBA basketball game against the Washington Wizards, Wednesday, Dec. 18, 2019, in Washington. The Bulls won 110-109 in overtime. | AP photo

“It just seemed like a real ugly game,” LaVine said. “I just kept telling them, ‘Hey, man it’s an ugly game, might as well get ugly with them.’”

Wendell Carter Jr. made a layup with 9.1 seconds left in overtime, completing the Bulls’ comeback from an 18-point deficit in the fourth quarter to beat the Wizards 110-109.

LaVine capped a 21-3 Bulls run with three free throws that tied the game at 96 with 5.5 seconds left in the fourth. Bradley Beal hit a jumper with 0.5 seconds remaining to put Washington ahead 98-96, but LaVine was fouled on the ensuing inbound play and hit two free throws to force OT.

“It showed that our identity should be like that for the rest of the year,” former Wizards player Tomas Satoransky said. “We won thanks to our defense.”

Lauri Markkanen’s alley-oop basket gave the Bulls their first lead since the first quarter, 106-105 with 1:47 left in overtime.

Beal’s two free throws put Washington back on top, and Isaiah Thomas’ two foul shots made it 109-106 with 53 seconds left. Carter, aided by a lane violation by Washington, made two free throws with 40 seconds to go and scored the winner after Beal’s miss.

Beal missed another jumper at the buzzer.

“Felt good,” Beal said. “I got an open shot over a small defender. It was just short.”

Markkanen had 31 points and nine rebounds, and LaVine added 24 points.

Davis Bertans led Washington with 26 points, and Beal finished with 22 on 4-of-19 shooting from the field.

The Wizards led 93-75 with 8:21 left in the fourth before Carter’s dunk started Chicago’s spurt. LaVine’s 3-pointer pulled the Bulls within 96-93 with 1:33 remaining. LaVine scored 10 points in the final three minutes of the period.

“Just didn’t execute like we did to get us the lead and I think that hurt us.” Thomas said. “We played like we were stalling, playing against the shot clock and hoping to make the shot at the end of the shot clock.”

In his return to Washington, Satoransky had 17 points.

Washington led by six at halftime, and Beal and Thomas combined for three 3-pointers in a 9-2 run that gave the Wizards a 74-61 lead midway through the third quarter.