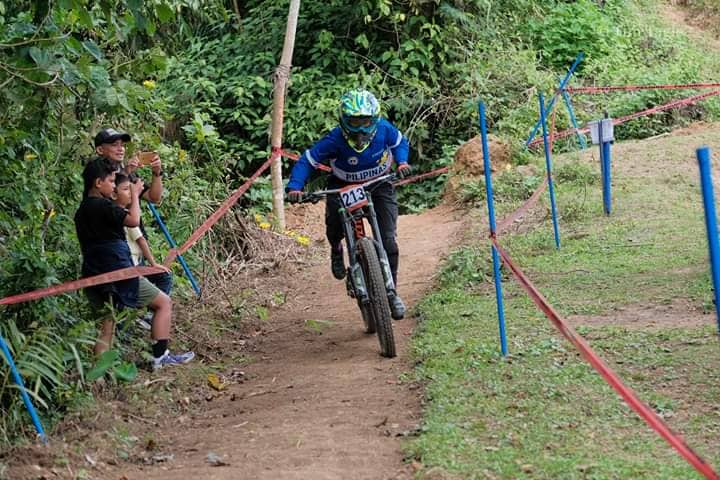 Pamela Jane Ruiz negotiates the track of the Downhill Race, one of the Cycling events, in the 30th Southeast Asian Games.| Contributed Photo by Pamela

For 19-year-old cyclist Pamela Jane Ruiz of Consolacion, a northern town of Cebu, that opportunity came sooner than she expected and just seven months after she was called to be part of the national team.

Pamela did not hesitate when she was called at the last minute to replace downhiller Naomi Gardoce who fractured her clavicle during the training just two weeks before the 30th Southeast Asian (SEA) Games.

Even when she was a cross country biker and was only left with a very short time to train as a downhiller, Pamela never thought of balking from representing the Philippines in the biennial multi-sporting event which the Philippines also hosted.

“No, I was excited because it is my dream to compete in the SEA Games and I have also been practicing and riding a lot here in Cebu even though I am still studying,” said Pamela.

Pamela did not mind that she was still new to downhill racing as she believed in her capabilities and also had plenty of moral support.

“I am confident in my abilities in the downhill. And I have my family and friends and my Keith DeFiebre cycling team that encouraged and supported me even though they are not by my side when I was in Manila,” Pamela narrated.

The young cyclist was also unfazed by the short time of preparation.

“And, I also have my sponsors and the national team that helped advised and coached me when I was training in Tagaytay. I have people who supported me and that became my motivation to go for my first SEA Games event despite the short time to prepare,” Pamela said. 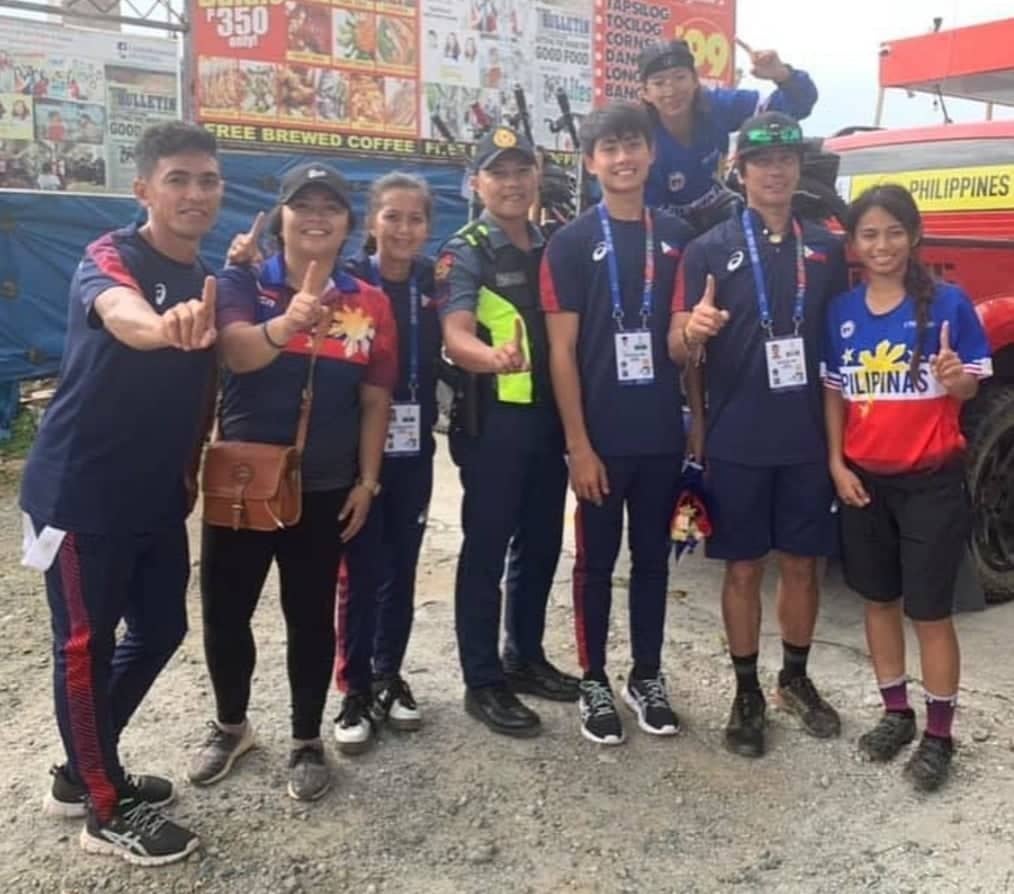 Pamela Jane Ruiz (extreme right) together with the rest of the Philippine Cycling Team. Contributed Photo

Pamela actually became a member of the national team on the strength of her performance as a cross country cyclist.

However, Pamela is not without experience in the downhill race, thus she was chosen as the last minute replacement to Gardoce.

“I’m new to downhill mtb (mountainbike) racing. I am originally a cross country racer. But, I have experiences. I have won 4 enduro races consecutively with just my xco (cross country) bike. And, my first downhill race was a UCI Asia MTB series in Clark, Pampanga. I won 4th place, I also just used an xco bike,” explained Pamela.

Pamela was told by PhilCycling Vice President Oscar “Boying” Rodriguez that she might be replacing Gardoce on November 17, that is if the tournament officials would allow the replacement.

Her first SEA Games stint was confirmed on November 20. The downhill race was on December 2.

“I started training and practicing the route on Friday November 22. Despite the weather, raining or sunny, we still kept on riding the track no matter how slippery it was. We also had to practice on a rainy day to know how it feels ‘cause we can’t predict the weather. The race was on December 2,” said Pamela.

Despite the limitations, Pamela still tried to reach her expectations.

“My expectations were I will just do my best because I am confident that we have a home court advantage, we won’t know what will happen during the race,” said Pamela.

Pamela also had her own goals. “My goal was to aim for top 3. We have been practicing a lot on the track while they only had 3 hours to practice on Saturday and 1 hour to practice on Sunday so I just wanna do my best hoping to get a medal or improve my own time from my practice runs.”

Pamela also had to contend with not having her own bike for a downhill race. She had to use a bike provided by the government to the national team.

The odds were piling up against Pamela but she wasn’t about to give up.

“I didn’t have a proper downhill bike until 3 days before the event. So on the event I was not totally used on using that bike. I was lucky na nakagamit jud ko sa bike before the race started. Kadiyot ra sad, mga 2 days ra jud ko ka practice sa bike track and pagka ugma na dayon duwa,” narrated Pamela.

A mechanical problem, however, ended Pamela’s dreams of making it to the top 3.

“During the race, just a few meters from the finish line, my rear wheel axle got loose when I shifted my gear during my sprint for the last two jumps, I tried to fix it but it was really hard no matter how I try so my option was to walk and push the bike to the finish line.”

And, that she did for about 500 meters just so she would be able to cross the finish line.

“My option was to DNF (did not finish) or push the bike to the finish line but I decided to push it because all I was thinking at that moment was to finish my race.” 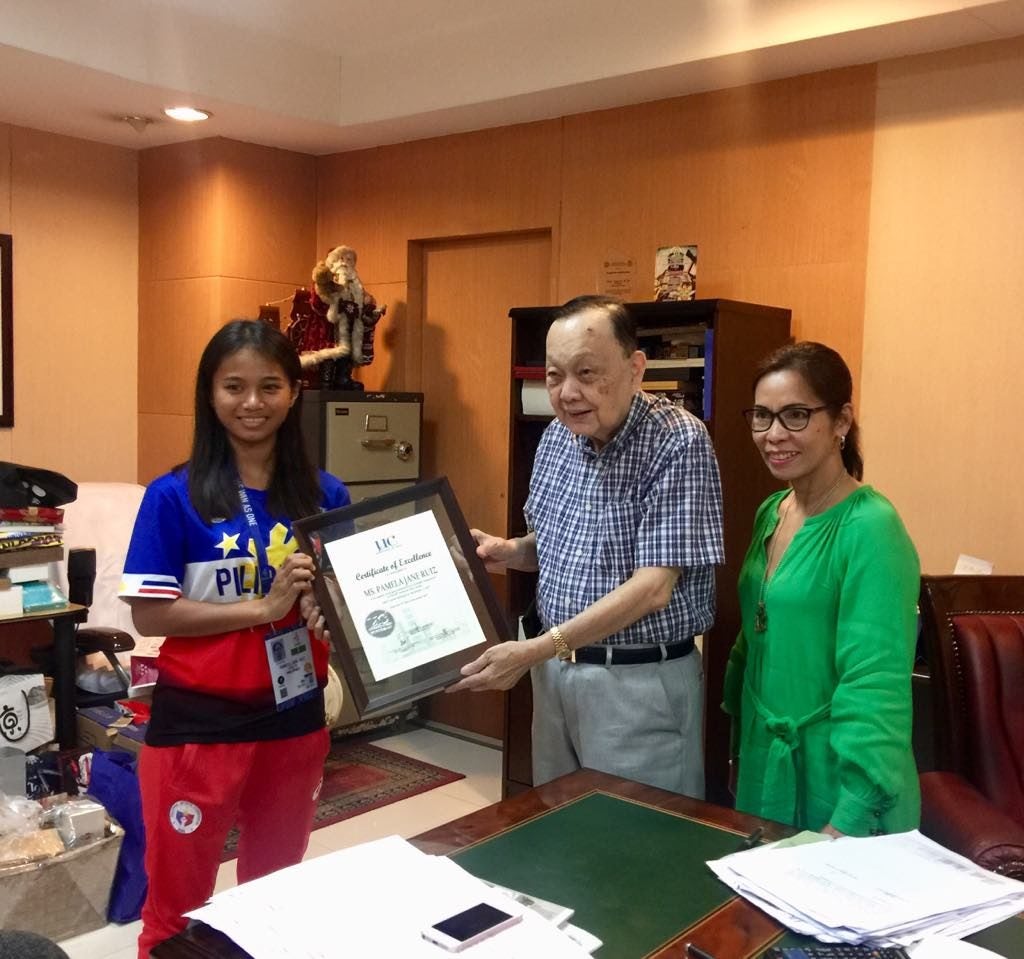 Pamela Jane Ruiz (left) gets a certificate of excellence from University of Cebu (UC) president, Lawyer  Augusto Go for her performance in the 30th Southeast Asian Games. With them is UC athletic director Jessica Honoridez. Mars G. Alison

And, all the while through the short preparation and the race itself, Pamela also had another worry, her studies. She is a second year nursing student of the University of Cebu Lapu-Lapu and Mandaue (UCLM).

“I had struggles because I wasn’t able to ask permission immediately from the school because it was a short notice, I was scared that they will drop me because I had more than 10 days absences.”

With all things considered, it is not a surprise that Pamela finished in the 8th place, just ahead of Vietnam’s Thi Thom Ca who failed to start in the race.

Although she was saddened that she wasn’t able to achieve her goals, Pamela is thankful for the experience and looking forward to her next SEA Games stint.

The lessons are not also lost on the young cyclist.

“I also learned a lot for myself with the travelling and going alone without my parents and the things on what I should do to improve for my next race,” she said.

“So, basically my SEA Games experience was full of learning and I also feel like I grew and came out from my shell because I am just really a quiet person and I am motivated to go back and compete for a stronger and better version of me,” Pamela said.

UC President, Lawyer Augusto Go, has also rewarded Pamela’s bravery in representing the Philippines against all odds by giving her a certificate of excellence and a cash incentive of P8,000.

(I am very happy because even if I didn’t get a medal, I was still recognized.)

Read Next
IN PHOTOS: Norman Castillo and P6.8-M worth of illegal drugs in red envelopes