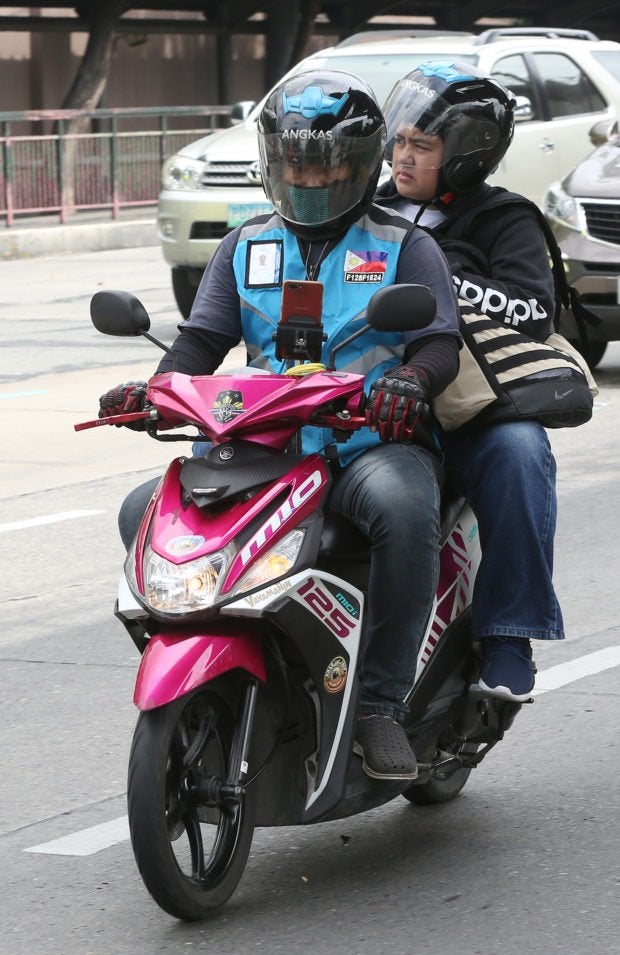 Two new motorcycle-hailing services will be joining a pilot test to determine whether two-wheeled vehicles could be used for public transportation after an interagency technical working group (TWG) on motorcycle taxis agreed to extend an ongoing dry run.

The results of the three-month extension, from Dec. 23 to March 23, will help transport regulators gather and validate data about the safety and reliability of motorcycles for public transport.

The outcome could also be used by lawmakers who would tackle a proposal to legalize motorcycle taxis, which is disallowed by a 55-year-old law, Republic Act No. 4136.

The first test, from May to December this year, involved only one company, Angkas, which claims it now has 27,000 bikers on its platform.

But after the TWG added on Friday night two new qualified players for the test run—JoyRide and MoveIt—it also set a cap of 10,000 motorbikes per company. That limit could undermine the livelihood of 17,000 Angkas bikers, according to the company.

The TWG said only a total of 39,000 bikes would be allowed to operate during the extended test period: 10,000 in Metro Manila and 3,000 in Cebu City for each of the three companies.

JoyRide and MoveIt passed the TWG’s evaluation of their overall readiness after it inspected their facilities and validated their operations.

It is unclear whether the Land Transportation Franchising and Regulatory Board (LTFRB) would allow motorcycle riders for all three companies to register in multiple apps, similar to what is allowed in the car-hailing business where the 65,000 drivers registered with Grab could also provide services under other operators.

TWG spokesperson Joel Bolano has not responded to the Inquirer’s request for comment on this.

Joyride vice president Noli Eala was not worried about the relatively low cap despite the massive demand for motorcycle taxis from commuters who want to overcome the road congestion in the metro.

“It’s like what the TWG always tells us: ‘You are not in business yet. This is still just a test for gathering data,’” he said. “The 10,000 cap, at least for the moment, might be temporary until bikes are fully legalized.”

Angkas public affairs spokesperson George Royeca was grateful for the extension, but was concerned over the possible displacement of thousands of their riders.

“Your everyday heroes in traffic will enter this Christmas season not knowing whether they will have money to feed their families next year,” Royeca said. “Some of you may have noticed that it’s hard to book a bike in the last few months. There is just too much demand.”

He said the LTFRB had turned down the company’s request to add more bikers.

“[Now], they have even decided to reduce the number of bikers from 27,000 to just 10,000. That’s a compromise on the quality of service you can expect, and a direct blow to over 17,000 Filipino families,” Royeca said.

He added that most of their bikers have been on their platform since 2017, and had passed the rigorous training that allowed Angkas to achieve its 0.003-percent accident rate.

“Why do we have to reduce and displace thousands of bikers? Why must we punish bikers who have already trained and proved their skill on the road?” Royeca said, urging the public to help #SaveAngkas and their bikers “so we can save you every day.”

JoyRide’s Eala said they were ready to deploy around 4,000 of the 6,000 bikers they have recruited since October. Like Angkas, their drivers have also passed training and safety courses, he said.

“We welcome the decision of the TWG to include our company and our brand in the pilot implementation,” Eala said. “It’s an opportunity and challenge to come up with a better alternative commuting for the public, and to showcase our commitment to safety and reliability of our services, and our commitment to help provide more data for the test.”

Toix Cerna, who is one of the three members representing commuters in the TWG, said that while the effort to expand the service was good, “one would really tend to think that what’s really offered is a concession to favored players [with] how opaque the process has been.”

The commuter advocates have long complained that they have been excluded from the TWG decision-making, particularly when it decided on Friday to add the two players and to extend the motorcycle taxi test run.

“Competition could improve services for commuters in terms of these values. But if the procedures for deciding competition are not transparent and above reproach, and the regulation of competition is unclear with unknown or frequently changing standards to follow, then the purported competition is really just an arbitrary awarding of an operations permit,” Cerna said.

Poe: What’s the basis?She also expressed hope that Congress would soon pass the needed amendments to RA 4136 to iron out the processes in regulating motorcycle taxis.

Sen. Grace Poe, chair of the Senate committee on public services, said she also wanted to know what was TWG’s basis for setting the 30,000 cap for Metro Manila and 9,000 for Cebu.

“What will happen to the current bikers who are in excess of the allocation for their company?” she said in a statement. And what would be done for the bikers who may lose their accreditation, Poe added.

“More importantly, is this the proper time for its implementation, when Christmas is approaching and passengers are having a hard time booking a ride?” she said.

Poe said that, like the government, she was also looking for solutions to the transportation problem.

But the decision-making process must be clear, especially when the safety of passengers and the livelihood of drivers and their families are at stake, she said.—With a report from Leila B. Salaverria