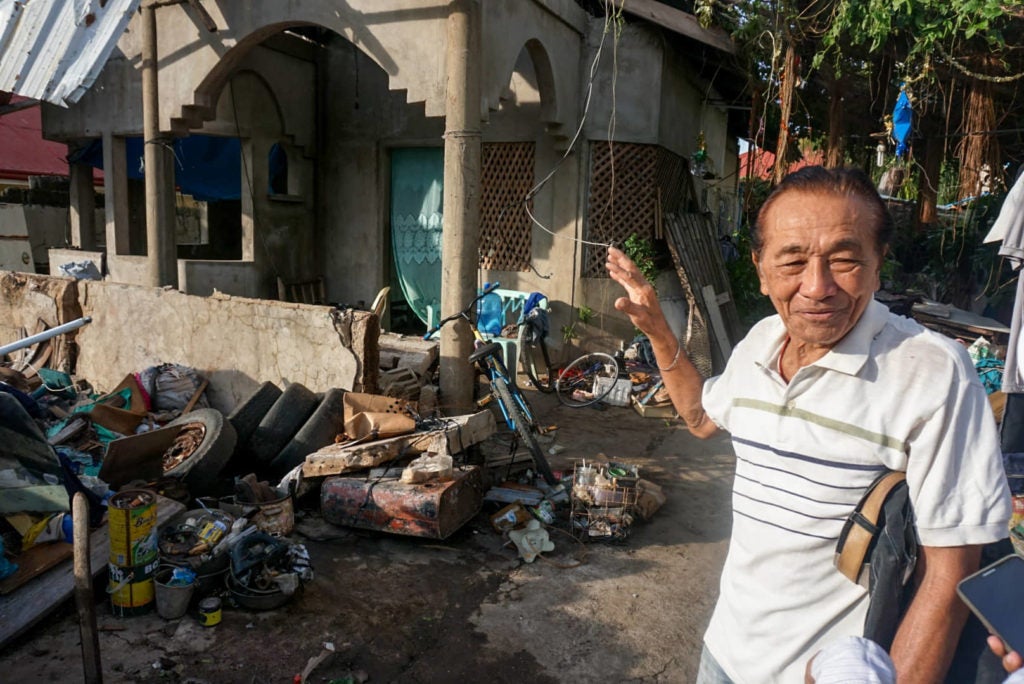 Despite losing the roof of his house to Typhoon Ursula, Guerillito Duarte, 75, refuses to brood on his loss and manages to smile attributing what happened to the will of God.

DAANBANTAYAN, CEBU, Philippines — “Mura gyud mi og wala nagpasko (It seemed like we were not celebrating Christmas),” said Marivic Carboncillo as she recalled  the wrath of Typhoon Ursula on Christmas Eve.

Carboncillo, 33, said the violent winds that rattled their tin roof and the torrential rain that soaked their belongings and submerged their house in hip-deep floodwater was all she could think about between 10 p.m. to 2 a.m.

(The wind was so strong. I was already scared and I was shaking with fear because the children were here.)

At around 8 p.m., Carboncillo said she and her husband, Aquiles, went home from a day’s work at an eatery at the Daanbantayan Bus Stop in Barangay Poblacion.

Though it was already raining early in the afternoon, Carboncillo said she did not know that they were already under Storm Signal No. 3 nor did she have an idea that Typhoon Ursula was closing on the island.

(We were not informed about evacuating. Most of the times there were patrols, who would tell us to leave the area because the wind would be strong, but yesterday no one informed us.)

(It was 10 p.m. and the rains was really heavy. My child shouted because she was already scared.)

Because their home is made of light materials, Carboncillo and her family needed to take refuge at their neighbor that had a concrete house to keep themselves safe during the night. 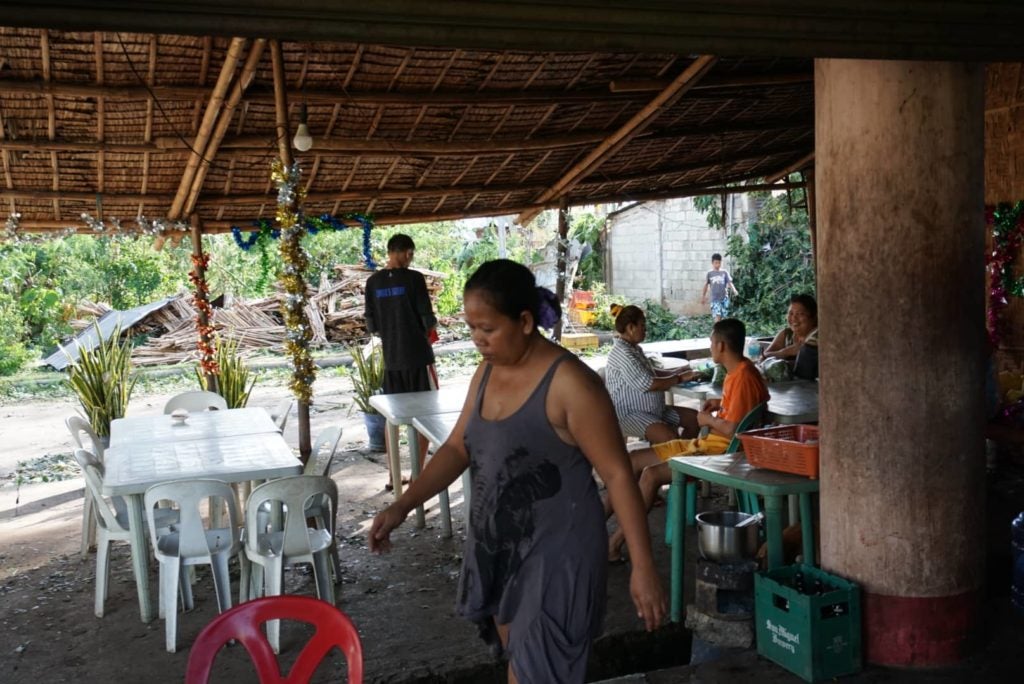 Marivic Carboncillo and her husband  still reported to work at the eatery and have put aside cleaning the house and drying the clothes soaked by the storm for after work. | Gerard Francisco

Guerillito Duarte, 75, was also caught off guard by Ursula’s wrath.

He even attended the 9:30 p.m. Christmas eve Mass at the Santa Rosa De Lima Church, which was a few meters from his home in Barangay Poblacion.

When the Mass ended past 10 p.m., Duarte chose to stay inside the church as the violent winds and rain had already started to pour.

Daanbantayan, on Christmas eve, was under Storm Signal No. 3.

When he reached home, the senior citizen found his roof already gone and his furniture and other belongings were soaked wet.

Aside from his home, his three-month old pumpboat, which was being used by his son in Malapascua Island, also a part of Daanbantayan, was also crushed by the strong waves.

A storm surge warning was also raised in the coastal areas of the town during the havoc of Ursula.

(I have not recovered my capital on that boat since we have it for just three months. I borrowed money for it. It cost nearly P200,000 but there’s nothing we can do it’s God’s will.)

Duarte said he had not even paid the money that he borrowed for the pumpboat.

But even with their losses, both Carboncillo and Duarte are thankful that none of their family members were hurt.

“Iya man nang pagbuot sa Ginoo, dawat lang ta (It is God’s will and we just have to accept it),” Duarte said.

(There is still Christmas. At least, we are just thankful that no one was hurt or was killed. We always celebrate Christmas. There’s nothing we can do about it if the typhoon hit on Christmas Day. It’s something we can’t control.)

Instead of feeding on the gloom of his devastated home, Duarte took his bicycle and rode to the public market to buy a gas lamp since electricity had not yet been restored in the entire town.

The Carboncillo couple, for their part, got up this Christmas Day and reported for work at the eatery.

(We will go home after we are through with our work in the eatery so that we can clean our house and dry our wet clothes.)

Marivic said they would have to carry on and stand up from this setback.

She said the typhoon could only dampen their belongings but not their spirit and hope in life, especially this Christmas season./dbs