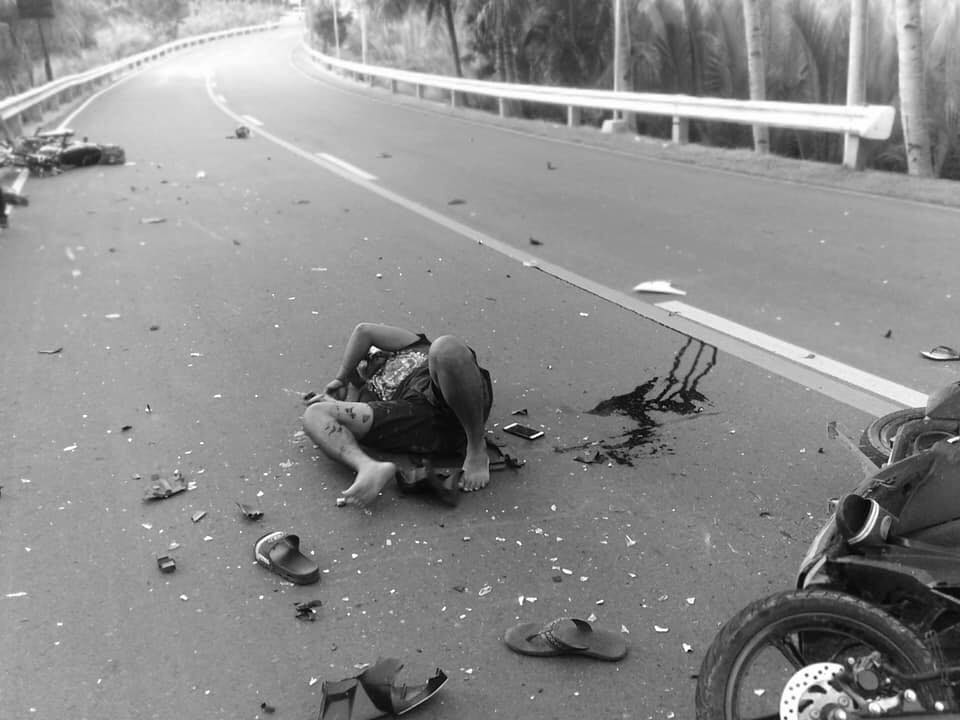 One of the victims of the motorcycle accident in Badian lies on the road. | photo courtesy of Razzel Rieta Vildosola Ygoña

Also on board Rumnick’s motorcyle was his older brother, Rick, while on board Sario’s motorcycle was his live-in-partner, Dupio.

In Sun’s investigation, th Otoc brothers were moving fast southbound to the direction of Moalboal town when he lost control of the motorcycle, went out of lane and collided with the motorcycle of Sario and Dupio.

Sario and Dupio were moving towards the opposite direction, northbound, as they were planning to go to the town’s poblacion.

(Otoc was the one who went out of his lane that is why he hit the other motorcycle.)

The area of the collision was also a blind curve, which is another factor that may have led to Otoc losing control over the motorcycle he was driving.

Police are still working to determine whether Otoc was speeding at the time of the accident.

The four people who were injured in the incident were immediately brought to the Badian District Hospital.

But the drivers, Otoc and Sario, were later brought to Cebu City for incurring major injuries.

Cañete said the Badian police continues to investigate the incident to check who among  the two drivers will be charged for the incident.  However, both parties may still opt for settlement.

With this incident, Cañete urged the travellers to be careful on the road and always be cautious, especially when approaching blind curves. /bmjo