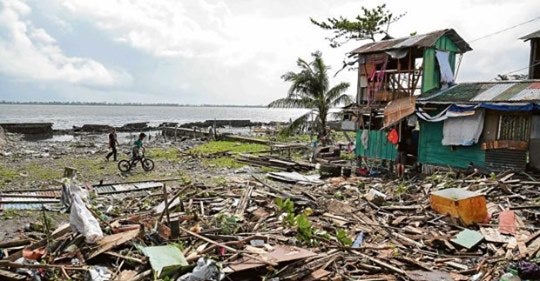 But typhoon evacuees at the Culasi Elementary School in Roxas City still celebrated the coming of the new year with simple gatherings.

“We had roasted chicken, bread, soft drinks a few pieces of apples which we ate in the dark,” said Angelo Orinse, one of the evacuees whose house in Barangay Culasi was destroyed by Typhoon “Ursula.”

“It was a welcome change from eating relief goods,” he added.

The provincial and city government and the Department of Social Welfare and Development have distributed rice, canned goods and coffee to the evacuees.

Private groups and non-government organization spearheaded by Buylog Capiz have also been gathering and distributing food and other relief materials.

While the New Year celebration was met with fireworks, these were significantly fewer and shorter duration compared to previous years.

“Many of us here would rather spend whatever money we have for food and for household items,” Orinse said.

A total of 17,795 houses were destroyed and 113,133 others were damaged in the provinces of Iloilo, Aklan, Capiz and Antique, according to the Regional Disaster Risk Reduction Management Council (RDRRMC) in Western Visayas.

The RDRRMC reported that 12,548 families with 54,188 persons were still staying in evacuation centers as of Tuesday afternoon.

Orinse said they still have not received shelter kits or tarpaulin kits being distributed by the Office of Civil Defense (OCD) for those whose houses were destroyed or damaged.

“We could use this as a temporary roof or wall for our house so we can return there instead of staying in the evacuation center,” he said.

The OCD had airlifted seven tons of shelter kits and tarpaulin sheets from Manila for those left homeless in Capiz on Sunday to help address the urgent need for temporary shelter.

Orinse said they are worried that they have to leave the evacuation center when classes resume Monday.

“We have to vacate the classrooms but we have not yet repaired our house,” he said.

At least 30 families or more than 100 persons are still staying at the evacuation center. / JE