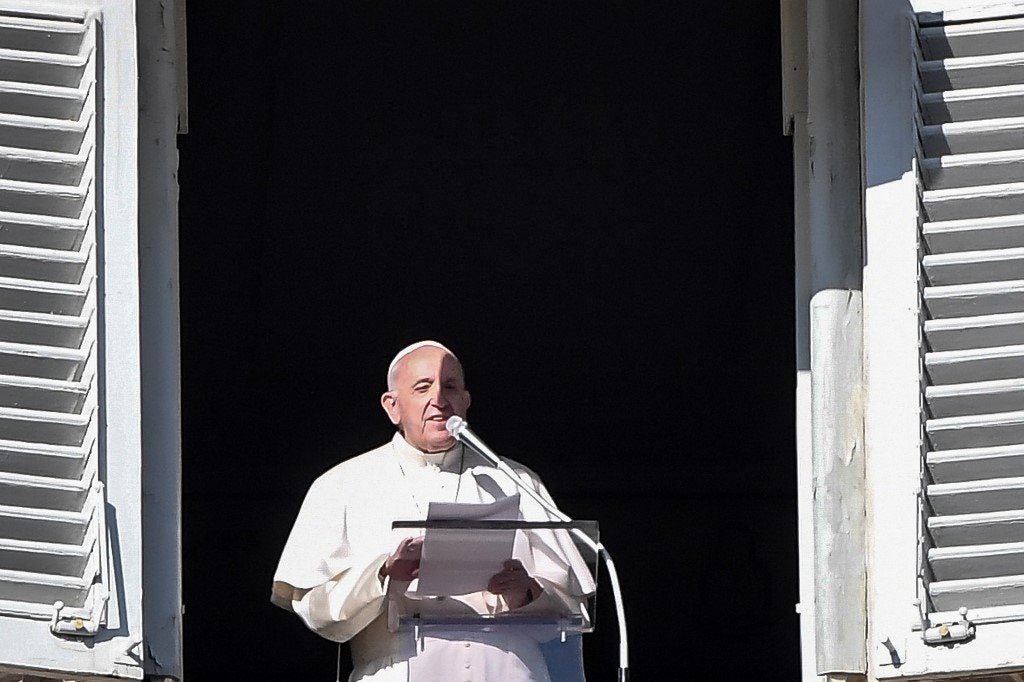 Pope Francis addresses the crowd from the window of the Apostolic Palace overlooking Saint Peter’s Square during the New Year Angelus prayer in the Vatican on January 1, 2020. Photo by Andreas SOLARO / AFP

VATICAN CITY — Pope Francis apologized Wednesday for slapping a woman who had grabbed him as he greeted a crowd of devotees, shortly before he delivered a speech denouncing “every form of violence against women.”

The image of a visibly annoyed Francis slapping his way free from the clutches of an admirer as he walked by Catholic faithful on New Year’s Eve instantly went viral on social media.

“It happens to me too. I apologize for the bad example given yesterday,” the head of the Catholic church said before celebrating Mass at the Vatican.

Twitter enthusiasts commented on the pontiff’s prompt riposte to the exuberant woman.

Francis had greeted children before the Nativity scene on Saint Peter’s square and was turning away when a woman who had crossed herself then cried out something, yanked his hand and almost caused him to fall.

The 83-year-old pope grimaced and scowled before managing to break free, slapping her hand twice as a security guard intervened.

The pontiff continued his tour, walking with some difficulty while maintaining a slightly greater distance from visitors, and gradually relaxed again as he met with other children.

Twitter comments revealed some support for his instinctive reaction.

“I’m not a Catholic, but the woman is wrong. It even seemed as if the Pope experienced pain at one moment,” one comment read.

Others were less favourable, however.

“Yikes. She was totally wrong but his reaction was not very Pope like,” another commented.

In his first Mass of the New Year, the pontiff later declared that “every form of violence against women is a blasphemy against God, who was born of a woman.”

He noted that the service traditionally celebrates the life of Mary, “the woman who wove the humanity of God.”

The blessing of God for all, he said, was “not magic but requires patience, patience and love.”

The pontiff then repeated “patience and love” in a comment that was not contained in a text distributed to media ahead of time and which seemed to be his reaction to what had occurred the night before.

The pope is known to enjoy greeting the public, and also has a reputation for speaking his mind and having a determined temperament.

Francis emphasized Wednesday that women were the “sources of life” and deplored that they were “continually insulted, beaten, raped, forced to prostitute themselves and to suppress the life they bear in the womb.”

He underscored that in the Christian faith, “from a woman was born the Prince of peace,” and bemoaned that women’s bodies were “sacrificed on the profane altars of advertising, of profiteering, of pornography.”