Children not allowed to join the traslacion 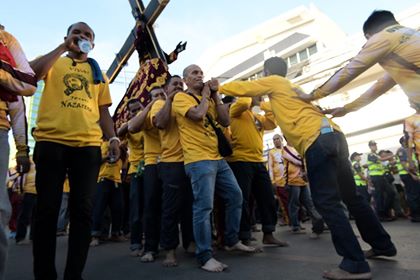 CAGAYAN DE ORO CITY, Philippines —There will be no flying of drones and no children allowed during the annual Feast of Black Nazarene and traslacion in Cagayan de Oro City next week.

Monsignor Persius Cabunoc, parish priest of the Nazareno Parish, said these are some of the security details agreed by organizers for Mindanao’s biggest religious event on January 8 and 9.

He said security will also be tight especially on those carrying backpacks.

Cabunoc said the police informed also him there will be a mobile phone signal blackout in the city on Wednesday, January 8.

Started in 2009, Cabunoc said they expected that more than 250,000 devotees from all over Mindanao would join the traslacion next week.

“The participation of devotees is getting bigger every year. We have devotees coming from as far away as Davao and Zamboanga, “ Cabunoc told reporters.

Dubbed as the “tamer version” of the Feast of Black Nazarene, the annual traslacion in Cagayan de Oro City started in 2009 when the Church of Quiapo donated a replica or the “Callejeron” to the Nazareno Parish in Barangay Lapasan of the city.

Cabunoc said there are now three replicas — one that is seen at the Nazareno Church in Barangay Lapasan; another that is being “borrowed” by other parishes; and the original “Callejeron” from the Quiapo Church.

“But next week, it is the original Callejeron that would be brought out to the city,” he said.

Cabunoc said the route of the traslacion will take the “Callejeron” from St. Agustine Metropolitan Cathedral to the Nazareno Parish Church via the city’s main Velez Street at 5 a.m. of Wednesday.

Prior to that, the “Callejeron” will be transferred from the Nazareno Church to the St. Agustine Metropolitan Cathedral on Tuesday evening.

Cabunoc said more than 3,000 policemen and Army soldiers will secure the devotees along the one-and-a-half-kilometer procession from the St. Agustine Cathedral to the Nazareno Church on Wednesday.

At least four ambulances and 50 medical responders will be on stand by along the route, he added.

“We are asking pregnant women and children not to participate in the traslacion,” Cabunoc said./elb