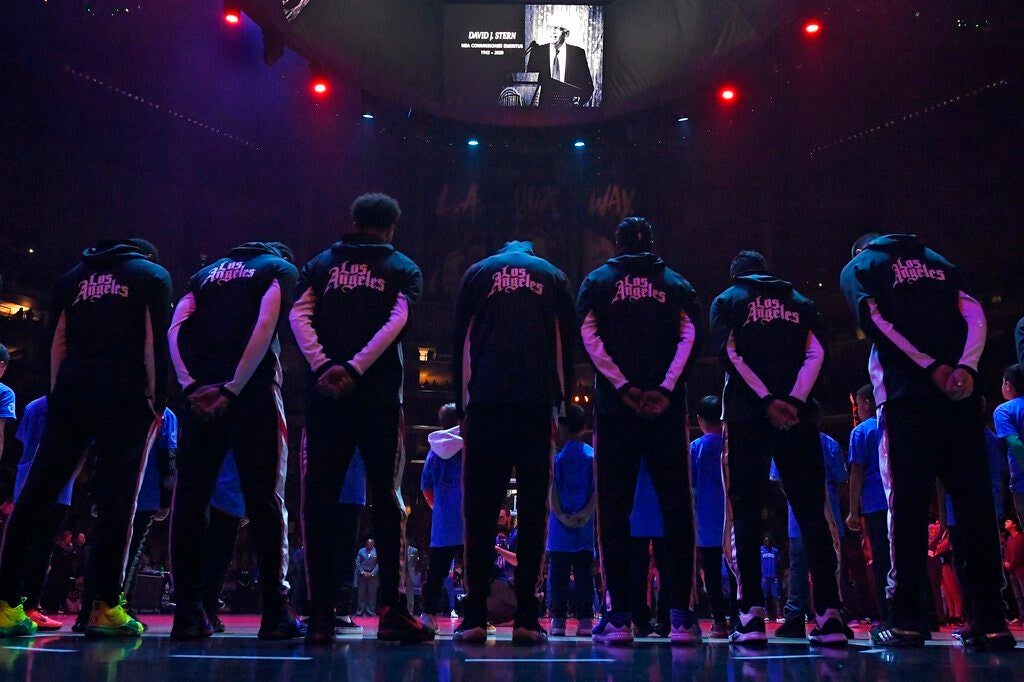 Members of the Los Angeles Clippers stand duringa a moment of silence Thursday, Jan. 2, 2020, in Los Angeles, prior to a basketball game against the Detroit Pistons, for former NBA Commissioner David Stern, who died Wednesday as a result of the brain hemorrhage. (AP Photo/Mark J. Terrill)

NBA players and referees will wear a commemorative black band on their uniforms for the remainder of the season and playoffs as a tribute to former commissioner David Stern, who died Wednesday.

The league announced the memorial gesture on Friday to recognize Stern, who was 77, for his contributions and innovations over three decades as commissioner before stepping down in 2014.

The bands will remain a part of game uniforms through the NBA Finals.

Stern, who passed away three weeks after suffering a brain hemorrhage, turned the league into a global sporting powerhouse, expanding the NBA from 23 to 30 clubs and overseeing the relocation of six teams.

Stern increased the NBA’s global brand and talent pool and revamped marketing of star players, stars such as Michael Jordan, Kobe Bryant, LeBron James and Magic Johnson evolving the NBA into one of the world’s most watched sporting leagues.

“Because of David, the NBA is a truly global brand, making him not only one of the greatest sports commissioners of all time but also one of the most influential business leaders of his generation,” current NBA commissioner Adam Silver said.