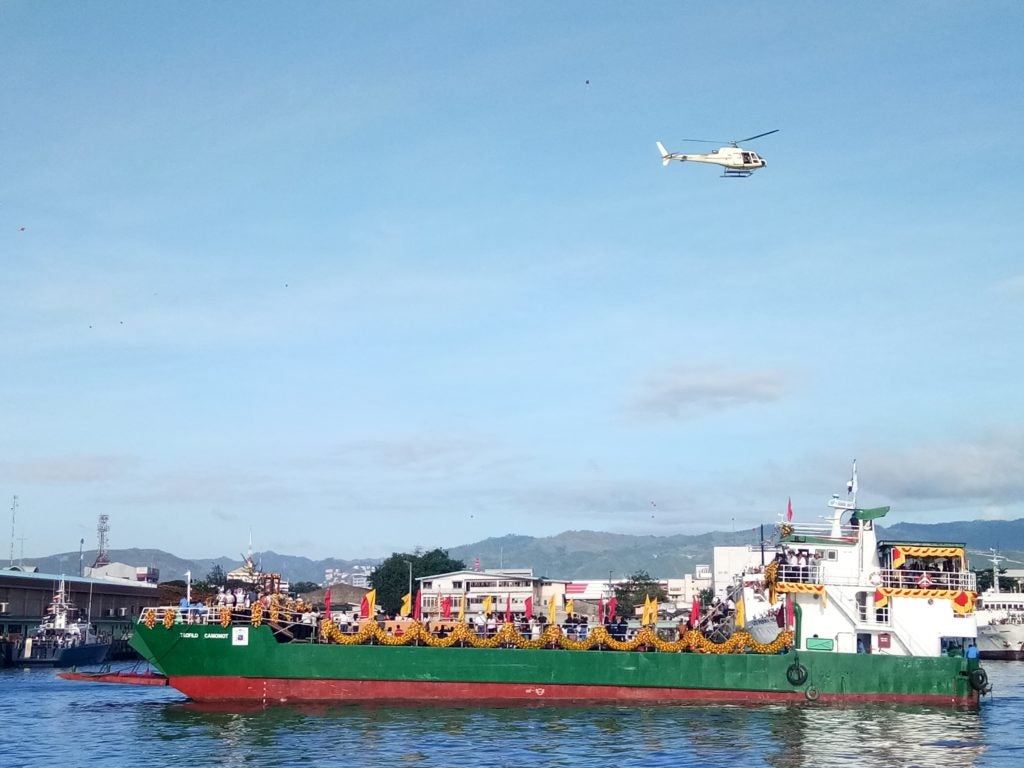 CEBU CITY, Philippines — The Mactan Channel was filled with the unending sound of sirens from more than 200 ships who sailed with the Galleon carrying the Holy Image of the Señor Santo Niño and the ships, which lined the Cebu ports.

The Santo Niño sits at the hull of the Galleon guarded by a colonial Spanish soldier, a reminder of how the Santo Niño arrived in Cebu through the fleet of Fernando Magallanes in 1521.

A total of 179 vessels sailed with the Galleon adorned with banderitas, flowers, and various banners and images of the Santo Niño. (See video of Correspondent Norman V. Mendoza on the fluvial procession at the Mactan Channel.)

As the red and yellow Galleon left the Captain Veloso Port in Lapu-Lapu City at 6:06 a.m., she was followed by cargo ships, yachts, and motorbancas resounding with the Sinulog beat as drum and bugle corps played throughout the procession.

An total of 42,830 people raised their hands to the Galleon where the Santo Niño stood tall together with the Bato Balani sa Gugma playing from the vessels and from the port.

WATCH: The galleon carrying the image of the Señor Santo Niño for this morning's Fiesta Señor Fluvial Procession is approaching the Cebu City port. A total of 179 vessels joined the procession along Mactan Channel from Lapu-Lapu City on Mactan Island to Pier 1 in Cebu City.|Alven Marie Timtim#FiestaSeñor2020saCDND

As the Galleon approached the major ports of Cebu, ships docked there begin to sound their sirens continuously.

The people on the ports also waved their hands in praise of the Santo Niño, children released balloons with prayers, and families waved flaglets of red and yellow.

Encina said there was a slight problem in keeping the participants in tow because the vessel operators wanted to be closer to the Galleon.

Encina also said there were vessels, which tried to enter to the Mactan Channel despite the 4 a.m. cutoff.

He said they were not allowed to enter anymore because they might disrupt the flow of the fluvial procession.

Most of the motorbancas tried to enter through the South Channel, but they were blocked by PCG troops.

Encina said this was a warning to operators of vessels for future fluvial processions that rules would be strictly imposed during these religious activities.

He encouraged operators to respect the sacred activity and follow guidelines to keep the order.

For Encina, the fluvial procession filled with faith and prayers and should be protected at all costs./dbs