A smashed in door is seen at the entrance of the Kingdom of Jesus Christ Church in the Van Nuys section of Los Angeles on Wednesday. (AP)

LOS ANGELES — Federal agents raided a Philippines-based church in Los Angeles early Wednesday in a human trafficking investigation that led to arrests of two church leaders in what prosecutors said was a decades-long scheme to trick followers into becoming fundraisers and arrange sham marriages to keep them in the U.S.

The local leader of the Kingdom of Jesus Christ church was arrested on immigration fraud charges in the early morning bust along with a worker who confiscated passports of the victims of the scheme, the U.S. attorney’s office said.

Its founder, Pastor Apollo Quiboloy, was briefly held by US customs officials in February 2018 after $350,000 in cash and gun parts were found in his Philippine-bound private plane. 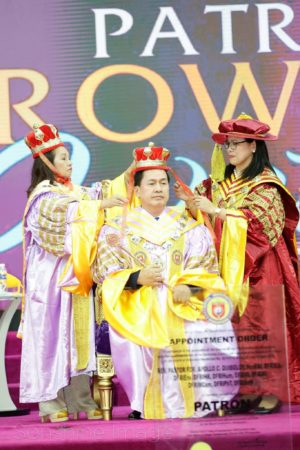 Pastor Quiboloy is being crowned Patron by the Royal Institution Singapore

Fundraisers who managed to escape from the church told the FBI that they had been sent across the U.S. to solicit donations for the church’s charity, The Children’s Joy Foundation, and were beaten if they didn’t make daily quotas, according to affidavit filed in support of the charges. Some described having to live in cars at truck stops.

An FBI agent investigating the case documented 82 sham marriages over a 20-year period and tracked $20 million raised between 2014 and the middle of last year that was sent back to the church in the Philippines.

“Most of these funds appear to derive from street-level solicitation,” according to the affidavit by FBI Special Agent Anne Wetzel. “Little to no money solicited appears to benefit impoverished or in-need children.”

In addition to raiding the church’s Van Nuys compound, agents were conducting searches at other Los Angeles locations and at two places in Hawaii linked to the church.

Calls to the church for comment were not immediately answered.

President Rodrigo Duterte has been known to have close ties with Quiboloy, the self-proclaimed appointed “Son of God.” Quiboloy was reportedly among those who supported Duterte’s 2016 presidential campaign. With INQUIRER.net