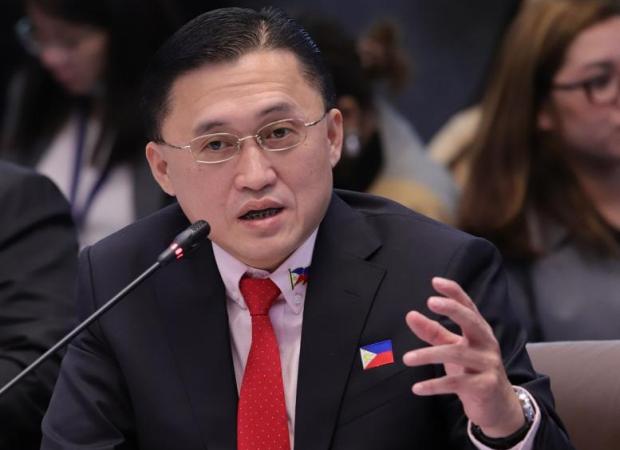 Sen. Christopher Lawrence Go led a Senate hearing on the outbreak of the novel coronavirus on Tuesday, Feb. 4, 2020. (Photo from his office)

MANILA, Philippines — “Since day one, the whole Duterte administration has said that it has been on top of the situation and is doing everything it can to address the issue,” Sen. Christopher Lawrence “Bong” Go said on Tuesday in reference to the global outbreak of the 2019 novel coronavirus acute respiratory disease (2019 nCoV ARD).

This reassurance was part of Go’s opening statement at hearing conducted on the issue by the Senate Committee on Health and Demography, which he chairs.

“Even a key official from the World Health Organization has commended the efforts of this government in responding to this worldwide health concern,” Go said.

He was referring to the WHO representative in the Philippines, Dr. Rabindra Abeyasinghe, who said: “WHO lauds PH government for its efforts and response on the spread of novel coronavirus.”

At the same time, the doctor, who was among those at the hearing, also repeated the WHO plea to the public to remain calm even as the novel coronavirus threat persists.

[Nevertheless, let’s use this opportunity to listen and try to help. We can’t just make sudden decisions in this typoe of problem. We need to study the issue closely and make evidence-based decisions.]

[We are here to enlighten the public about this issue. Let’s prioritize the welfare, health, and interests of each Filipino. At times like these, when we are worried about what will happen to our families and the people we live, we should help each other. Let’s unite and engage in bayanihan for the good of each Filipimo.]

Key government officials invited in the hearing took the opportunity to communicate to the public the precautionary measures already in place to protect Filipinos from the spread of the virus.

Go posed questions to the officials and experts regarding the nature of the disease, severity of the problem, its impact on the country including the economy, and the best way forward for the government to mitigate its effects.

“Eighty patients are under investigation in the Philippines, 67 are currently admitted and isolated, 10 discharged under straight monitoring,” Duque said during his presentation.

Duque also clarified the mode of transmission of the disease, saying that nCoV could survive for as long as 10 hours on inanimate objects like keyboards and tables.

According to the DOH, President Rodrigo Duterte has approved the budget needed for the procurement of personnel protective equipment for around 5,000 workers who will need them in fighting the spread of nCoV.

Tourism will take a hit

As for the economic impacts of the disease, Finance Secretary Carlos Dominguez III said that the economic costs of the infection on the economy would most likely be centered on the tourism sector.

But he said; “It’s too early to estimate the economic impact of the novel coronavirus.”

To counter the identified economic impacts, Dominguez said that the Department of Tourism would further strengthen the promotion of local destinations.

While these developments could slightly restrain economic expansion, Dominguez said that Philippines was standing by gross domestic product growth projection of the DOF, which is 6.5% to 7.5% for 2020.

Meanwhile, Executive Secretary Salvador Medialdea also gave updates on the President’s directives amid the threats of the 2019-nCoV ARD.

“President Rodrigo Duterte has expanded the travel ban to include travelers to and from mainland China, Hong Kong, and Macau amid the threat of the novel coronavirus,” Medialdea said, adding that Duterte “has also ordered the establishment of repatriation and quarantine facility for novel coronavirus.”

Medialdea also mentioned that the establishment of quarantine facilities was still being studied.

Go hits back at those trying to cause panic

In his statement, Go expressed his trust and confidence in the health officials, saying: “I know that you are all working double time to address this current threat. Not only those who are present here today, but (all) health workers and practitioners who sacrificed their time and their own lives to serve their country and protect fellow Filipinos.”

The senator also hit back against critics who continued to spread false information with the view of misleading the public and causing widespread panic.

[Those who keep talking just to say anything, the bashers who are riding on the situation for their own self-interest, people who just want to create panic, and those who are spreading fake news — you should be the ones to be quarantined.]

Go urged the public to cooperate with the government and help address the issue, adding that now would be the right time for the nation to unite.

“This is a very emotional issue for all of us, but I appeal to everyone for your cooperation. We have our officials here and our health experts to provide us with answers. We are doing this because we care for your families, our country, and the worldwide community,” he added.

Ending his statement, Go reminded the public that the President would always prioritize the health and welfare of Filipinos.

[As someone acting as everyone’s father, he is concerned about the welfare of his children. Our President listens to your complaints, but his decisions are based on what’s right and what will be good for everyone. He’s balancing everything.]

“That is why we elected one leader. We chose one leader to decide and to lead our country especially in these trying times,” he added.