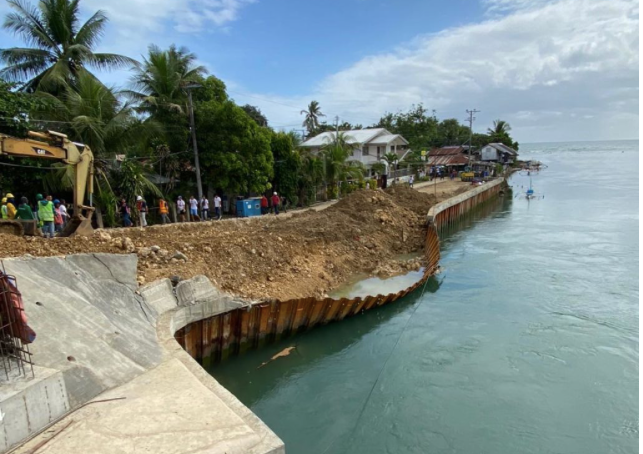 A portion of the  retaining wall of the Parallel Suba Bridge in Liloan town has collapsed. | Contributed photo

Frasco said in a statement that he would want the project to be investigated after officials found out that the bridge’s retaining wall collapsed.

Frasco in his statement identified WTG Construction/La Prueba Construction as the contractor of the project which was funded by the Department of Public Works and Highways (DPWH).

“It was discovered that the steel pile sheets supporting the retaining wall had given in, causing the concrete beams atop to break and disintegrate. Cracks were also seen on the embankment of the bridge whose supporting steel piles appeared rusted, corroded, cracked, and bent,” the statement read.

Frasco was also quoted saying that he “questioned the contractor’s representative on the apparent poor quality of the work and materials used for the project.”

“The intention of this project was to alleviate traffic and ease people’s suffering. Because of evidently poor construction quality and an apparent disregard for standards and safety, the contractor is causing public endangerment,” the press statement said, quoting Frasco.

“I am calling on the DPWH for an immediate investigation, the suspension of this project, and to consider the blacklisting of this contractor,” it added./dbs

Read Next
HRET orders collection of ballots in relation to Durano vs. Frasco electoral protest