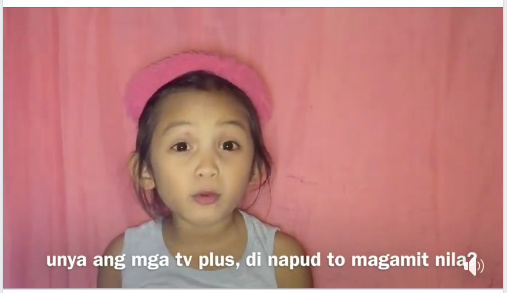 CEBU CITY, Philippines—For weeks people have been creating a buzz online because of the impending cancellation of the broadcast franchise of television network ABS-CBN.

ABS-CBN is one of the biggest TV networks in the country that has been creating hundreds of shows and has introduced thousands of artists to the Filipino people.

With that, solid Kapamilya fans are worried about the station’s fate.

Among those worried is this little vlogger from Pinamungajan town in southern Cebu. She is Nitch Macapobre, who is six years old.

In only three minutes and 40 seconds, Nitch aired out everything that she wanted to say just so ABS-CBN can continue staying on the airwaves.

(Shoutout to ABS-CBN, how true are the rumors that you’ll only be until this March?)

The young vlogger then continued airing out what she feels about if the TV station will permanently be shut down.

(Yes, it’s true that I’m stressed with your telesrye, but that just means that I follow your shows every night.)

She worries about what will happen with her top  ABS-CBN primetime leading men, who are Cardo (Probinsyano), Gabo (Make It With You), and Chico (Pamilya Ko).

(Don’t tell me I have to transfer to being a Kapuso. First of all, it’s only Jessica who I know, no offense to those in GMA.)

Actually, all Nitch had to do was to internalize and read the script written by her mother, Christine Fajardo.

(Actually, about ABS.. We just thought about it because it is trending due to the shutdown issues so we were just hoping a lot would watch the video.)