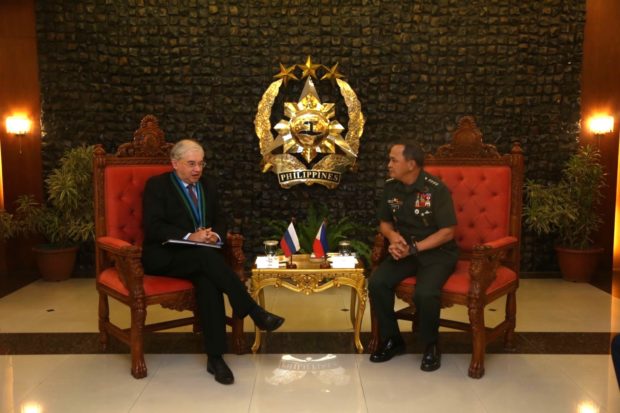 The Ambassador of the Russian Federation to the Philippines, his Excellency Igor Khovaev, meets with Armed Forces of the Philippines chief Gen. Felimon Santos Jr. on Monday at Camp Aguinaldo. / AFP PAO

MANILA, Philippines—The Russian government has taken steps toward filling a void in military alliance that could be left by President Rodrigo Duterte’s termination of the Philippines’ Visiting Forces Agreement (VFA) with the United States, which is being questioned by several senators.

The Russian Embassy, on a Facebook post, said the discussion between Khovaev and Santos “focused on the development of military and military-technical cooperation” between the Philippines and Russia.

The week started with a courtesy call of H.E. Igor
Khovaev, Ambassador of the Russian Federation in Manila on the newly appointed Chief of Staff of the Armed Forces of the Philippines Hon. General Felimon Santos Jr.

The discussion was focused on the development of military and military-technical cooperation.

Read Next
Look around, there is love everywhere!