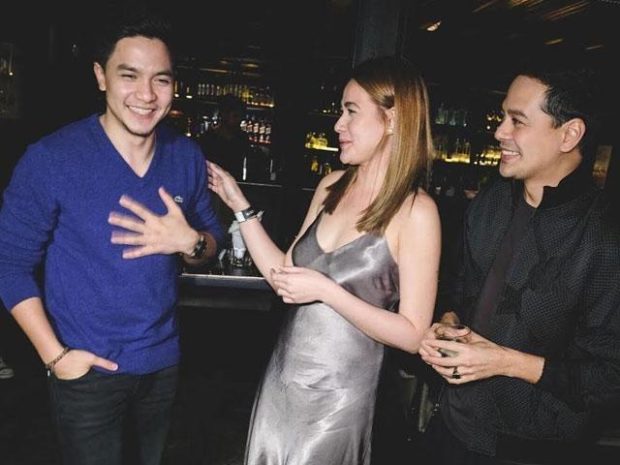 That, in sum, was how Kapuso actor Alden Richards described how he felt the first time he saw Bea Alonzo, his next leading lady from the Kapamilya network.

“I’m such a fan of ‘One More Chance,’ and she (Bea) knows that. I was starstruck the first time I saw her and John Lloyd Cruz,” he recalled. (John Lloyd is Bea’s leading man in the said movie, which is one of Alden’s favorites.)

Alden was recently spotted with Bea in Thailand.

“We shot something there for a project, but we cant’ reveal anything yet,” the actor admitted when prodded by reporters in a recent interview.

So, how was it like working with his female idol?

“She’s (Bea) very kind and easy to be with,” he said. “Being able to work with someone you used to idolize is fun and heartening.”

While a new film may be in the offing, there’s no forthcoming soap, he said. “There are a lot of pitches and talks, but nothing’s final yet. But for sure, there will be one [movie] this year,” the Kapuso hunk said.

Last week, on his Instagram page, Alden posted a mirror selfie—bare-chested and looking pretty pleased with his toned abs, which he had been secretly working on.

The comments section, as expected, was a riot. “Yes, pandesal for breakfast,” actress Lovi Poe wrote. “Well, bring me some coffee!” a fan replied.

“I owe it to myself because, for the longest time, I have been telling myself that I want to have abs. But puro drawing lang,” he told reporters at a recent visit to the set of “Centerstage,” GMA 7’s upcoming singing competition for kids .

But this time, he willed himself to achieve his goal. And through proper exercise, diet and a whole lot of “discipline and hard work,” the 28-year-old actor was able to shed around 25 to 30 pounds in the last four months.

And now, the definition on his stomach he sees when he looks at himself in the mirror certainly isn’t just a drawing.

“I hid it [from the public]; I didn’t show anyone that I was training and preparing for something. I rarely took selfies at the gym,” he related. “Because I wanted it to be a surprise for 2020.”

“Centerstage,” which airs Sundays starting Feb. 16, will be hosted by Alden and comedian Betong Sumaya. Comprising the panel of judges are Pops Fernandez, Aicelle Santos and Mel Villena.

“This is something new for me. The challenge for me is dealing with kids and figuring out how they think. I have to come up with ways on how to make it easier for them to take the judges’ and viewers’ decisions,” he said.

In a separate interview, he related that he enjoys being around aspiring artists because he sees his younger self in them. “In our show ‘All-Out Sundays,’ for instance, there are a lot of new artists, and it’s nice to know that they’re all so eager to work on their craft—singing, dancing, comedy,” he said.

After 10 years in show biz, Alden is now the one being called “kuya.” “That’s nice to know, that I’m someone they look up to. I want to serve as an inspiration for them. We always have to be up for something better and big, not only for ourselves, but for the people who love us.”

While his job in “Centerstage” is limited to hosting, Alden still hopes to learn or pick up some valuable tips when it comes to music, because he does dabble in it and hold concerts from time to time.

“There’s a different sense of fulfillment when I’m able to pull off [something] that’s out of my comfort zone, like some of the stuff I did in my past concerts. It’s a nice feeling, a liberating experience. It’s great being able to explore different fields in show biz, and discovering new things you didn’t know you were capable of,” he said.

Still, there are moments of doubt. But the uncertainty, he pointed out, is beneficial to an artist in the long run.

“I get nervous whenever I have to perform or host. But I think that an artist becomes stagnant when you don’t get nervous anymore or when you get overconfident or full of yourself,” he said. “When you start thinking that you can do everything, you stop growing.”

His latest drama series, “The Gift,” ended last week after a seven-month run, and he’s having “a hard time letting go.” “I was happy with the show and cared a lot about it. I found a new family in it. But all shows end. What matters most is what the project was able to give viewers,” he said.