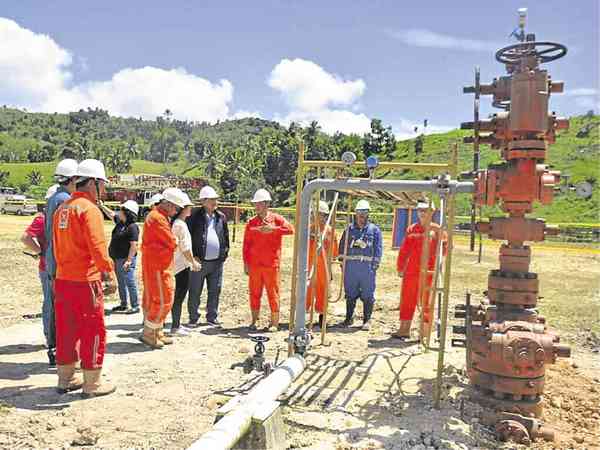 CEBU CITY, Philippines — Hopes were up for Alegria town to improve the lives of its residents when President Rodrigo Duterte led the ceremonial opening of the valve for the oil drilling project there in May 2018.

Pres. Duterte even hailed that “Dato na ang Alegria!” during the ceremony.

But in a meeting with officials from the Department of Energy in Central Visayas (DOE-7) last February 19, Governor Gwendolyn Garcia said she learned that the town has received only a little over P100,000 share from the project yet.

“They (DOE) estimated [that] ang share sa Alegria for 2018 and 2019 [to be] somewhere between P500,000 to P600,000 and yet ang nadawat sa municipality of Alegria so far has only been P100,000 plus and yet under the local government code, when we talk about share of the national wealth, that should be remitted directly on the first five days every quarter,” Garcia said.

Under Presidential Decree no. 87 or the Oil Exploration and Development Act of 1971, 60 percent share from the net sales of the project shall be remitted to the Philippine government while the project contractor, China International Mining Petroleum Ltd. Co. (CIMP), shall be entitled to the remaining 40 percent.

Garcia said she has asked the DOE to provide a copy of the detailed financial statements of CIMP on the project, including their operations cost and gross income for 2018 and 2019.

The governor said she hopes that the DOE will also look into the possibility that CIMP will directly remit the share of Alegria in the revenue of the oil project.

Alegria, a fourth-class municipality in the southern part of Cebu, operates with a yearly budget of only around P90 million — P75 million from its internal revenue allotment (IRA) share and P15 million from local revenues.

Montpeller, an upland barangay, is also one of the poorest barangays in Alegria where its residents’ major livelihood is farming.

“These funds could very well have been used already for services that can be extended to the people of Alegria,” Garcia said.

Garcia also said that it is worth looking into if the host LGUs are indeed just entitled with the 40 percent of the share of the government’s share from the project’s proceeds.

Under Section 291 of the Local Government Code, LGUs are entitled to 40 percent of the Philippine government’s share of the mining taxes, royalties, forestry and fishery charges and such other taxes, fees or charges, including related surcharges, and interests.

While the LGC provides that the LGUs are entitled only of the 40 percent share, Garcia said the law does not include oil and gas proceeds in the items where the percentage share is applicable. /rcg