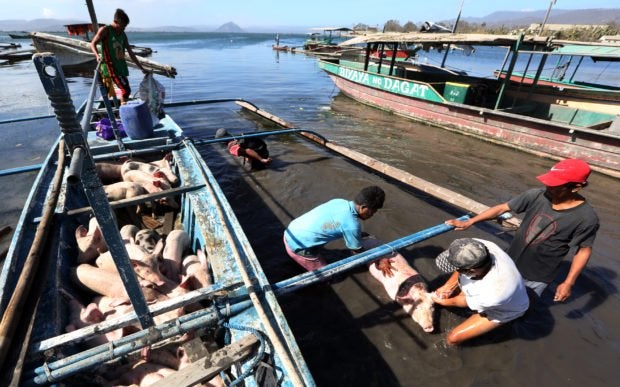 PIG RESCUE Hogs raised by residents in their backyards on Taal Volcano Island in Batangas are hauled by boats across Taal Lake as the volcano spews ash and steam in January. —NIÑO JESUS ORBETA

SAN PEDRO CITY, Laguna, Philippines — People fleeing from the steam-driven eruption of Taal Volcano may have contributed to the spread of the African swine fever (ASF), a viral animal infection, in Batangas province.

Batangas, recently devastated by the ash spewed by Taal in January, had just confirmed its first case of the swine disease in Laurel town.

Laurel was one of the 14 towns hit by the ashfall. A lockdown had been imposed in the town for weeks amid threats of a more explosive eruption.

Ciriaco Calinisan, Laurel mu­nicipal administrator, said the presence of the virus was confirmed in backyard farms in Barangay Molinete, where about 4,000 pigs had been readied for culling, a government countermeasure to the virus spread.

“We have already prepared the pits and I understand [the culling] was to start [on Tuesday],” Calinisan said. The case in Laurel was what prompted Lipa City Mayor Eric Africa to order a ban on the entry of live pigs, processed pork and animal feed in the city, with more than a hundred small- and large-scale pig farms.

In 2019, Batangas, being one of the top producers in the P250-billion livestock industry, promptly declared a province-wide ban in a bid to keep the farms virus-free.

“Two weeks ago, we had a meeting with President Duterte and the DILG (Department of the Interior and Local Government) and we had discussed, among other things, the ASF,” Africa told the Inquirer. “It is high time we take strict measures.”

Calinisan said the pigs to be depopulated were inside the 1-kilometer radius, as identified under the 1-7-10 protocol of the Department of Agriculture (DA).The protocol prescribes that farms within 7 km and 10 km be placed under surveillance and to immediately report suspected cases.

Calinisan said the local government believed the entry of the virus came with the movement of people and the fact that residents from one town having to share the evacuation center with residents from another.

“We cannot say exactly from where [the virus came] but when people evacuated, they were dispersed to different areas or to another province. Some would come back [despite the lockdown] and carried contaminated food to feed the animals [that most people had left behind],” he said.

In evacuation centers, some residents had brought in and slaughtered their pigs, in fear that the animals would die when left without food in towns under lockdown.

The DA offered to pay P5,000 as indemnification for each pig surrendered for culling.

In Calabarzon (Cavite, Laguna, Batangas, Rizal and Quezon) region, at least 20,000 pigs had been depopulated so far, as all provinces, except Laguna, had confirmed cases of ASF.

In Camarines Sur, the DA on Tuesday declared a lockdown in Magarao town, after tests confirmed that meat samples from five villages were tainted with the virus.

Emilia Bordado, the DA spokes­person in Bicol, said a team of veterinary personnel was dispatched to start the culling of close to a hundred pigs in the villages of Sta. Lucia, Sto. Tomas, San Miguel, San Pantaleon and Sta. Rosa.

Magarao is the third town in Camarines Sur, next to Bombon and Calabanga, where ASF cases had been confirmed.

A partial state of calamity was declared in Calabanga town on Monday after the DA identified the villages of Sta. Salud and Balongay as ground zero of the disease, said Daniel Abalayan, head of the municipal disaster risk reduction and management office.

“About 13 barangays were affected here. The declaration would allow us to access fund to control the spread of the virus,” he said.

—With reports from Mar Arguelles and Ma. April Mier-Manjares

Read Next
Lent at the time of COVID-19