Lent at the time of COVID-19 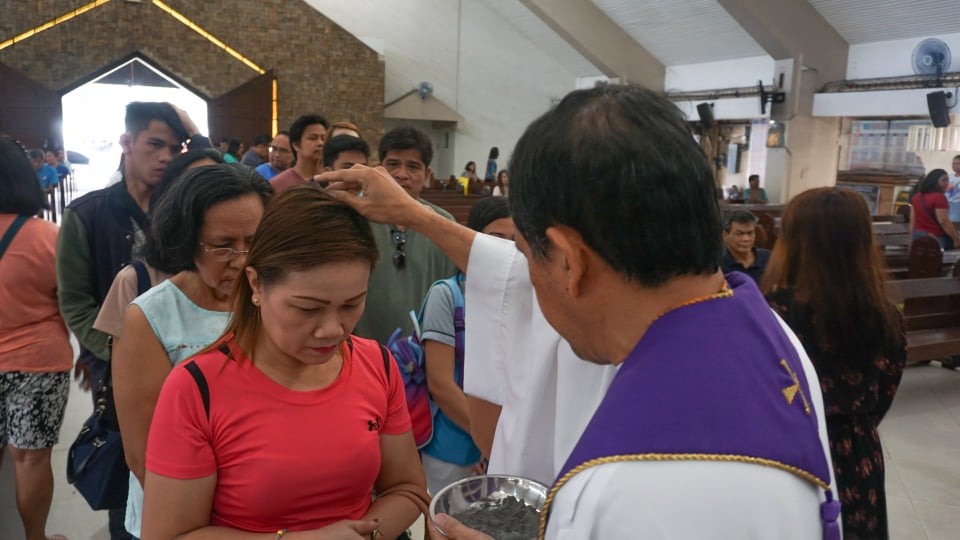 A priest sprinkle ashes on the heads of churchgoers in an Ash Wednesday Mass at the Sto. Rosario Parish along N. Bacalso Avenue in Cebu City on February 26, 2020. CDN Digital photo | Gerard Vincent Francisco

CEBU CITY, Philippines – Like most Catholics in Cebu, Kohleen Yvonne Chong is now preparing herself to take a break from eating pork.

This Wednesday, February 26, 2020, hundreds of devotees like Kohleen are expected to flock to churches to attend Ash Wednesday Mass.

However, the 22-year-old film editor, who works in Cebu City, is also preparing other things to carry with her when she goes to church.

This includes a clean face mask, and a pocket-sized bottle of rubbing alcohol.

Kohleen is also keeping her health in check as means to prevent possible contamination of diseases like flu and the Coronavirus Disease 2019 (COVID-19).

“It’s better to be prepared nowadays. Getting off work because you’re sick is both a financial and physical burden for me,” said Kohleen.

In Roman Catholicism, Ash Wednesday marks the start of Lent, a season of fasting and praying, in the liturgical calendar.

This explains why most faithfuls like Kohleen would have to do away with pork until Easter Sunday.

But with the threats of COVID-19 still plaguing the country, the Catholic Bishops Conference of the Philippines (CBCP) has issued several preventive measures.

The latest one, released on February 20, 2020, was a recommendation for all churches to sprinkle ashes on the crown or the head instead of marking the forehead with a cross to avoid body contact.

Since January, COVID-19 has infected over 80,000 patients from more than 25 countries, and claimed the lives of more than 2,600 individuals.

According to the World Health Organization (WHO), the disease is caused by the 2019 novel coronavirus – the tentative name of the new coronavirus strain, which experts described as a variant of the Severe Acute Respiratory Disease – CoV or SARS-CoV.

The city has been under lockdown since the outbreak to contain the spread of the virus, which recently sparked global fears as the death toll outside China continued to rise.

The disease is spread primarily through respiratory droplets, usually manifested in coughing or sneezing. These contaminated droplets have the ability to infect other people through the nose, mouth or eyes.

Touching contaminated hand, and direct contact with people having the virus are also possible means of contracting the disease.

This is a painting done in 1881, where a Roman Catholic priest is depicted to sprinkle ashes on the crowns of the devotees during the start of the Lenten season | WIKI COMMONS FILE

Meanwhile, the CBCP clarified that the sprinkling of ash on the crown has been the “ancient practice of the church.”

“This is not an innovation but in accord with the ancient practice of the Church,” CBCP said, quoting their president Archbishop Romulo Valles.

A day after CBCP released their recommendation, the Manila Archdiocese, however, stuck to the present ways of putting ash on the forehead of devotees.

Meanwhile, on February 24, 2020, the Archdiocese of Cebu has expressed their willingness to comply with the guidelines from CBCP this coming Ash Wednesday.

For Kohleen, however, it did not matter to her whether the ashes will be sprinkled on top of her head or wiped on her forehead.

“What’s important for me is that I am prepared in going to church, and observe Lent without getting the risk of contracting any diseases,” she said. /bmjo

Read Next
The economics of COVID-19