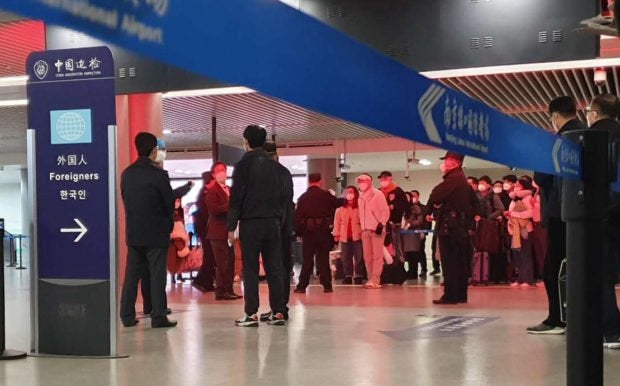 Koreans are separately screened by Chinese health authorities at an airport in Nanjing, Jiangsu province, on Tuesday. (Yonhap) via The Korea Herald

SEOUL — Gripped by COVID-19 fears, more than two dozen countries are barring entry and tightening restrictions on travelers from Korea, with neighboring Japan becoming the latest to impose such a ban.

Japanese Prime Minister Shinzo Abe said from Thursday it will ban the entry of foreign nationals who have visited the Korean city of Daegu and neighboring Cheongdo, North Gyeongsang Province, the region hit hardest by coronavirus here, according to Japanese media reports Wednesday.

Seoul’s Foreign Ministry said Tokyo had informed it of the planned entry ban in advance through a diplomatic channel. “We have stressed to the Japanese side that no excessive or unreasonable measures should be taken against Korean nationals and travelers, while explaining the government’s effort to contain COVID-19,” the Foreign Ministry said. “We have asked the Japanese side for a cautious response.”

Korea has seen the number of infections increase more than 20-fold since last week. As of Wednesday afternoon, the COVID-19 tally stood at 1,146 cases with 12 deaths, the most cases outside of mainland China, where the virus originated in December and which has reported over 78,000 confirmed cases.

On Wednesday, 16 countries and territories had imposed an entry ban on Koreans and others who have visited the country within the last two weeks, doubling from the previous day despite Korea’s urging to refrain from “excessive measures.”

Other countries have stopped short of declaring outright entry bans but are imposing rigorous restrictions on anyone entering from Korea, such as mandatory medical examinations and self-quarantine orders. They are Taiwan, Macao, Thailand, UK, Kazakhstan, Kyrgyzstan, Tajikistan, Turkmenistan, Oman, Qatar and Uganda.

Meanwhile score of countries have also advised their citizens to refrain from traveling to Korea.

The US Centers for Disease Control and Prevention issued the highest travel warning on Korea, recommending American travelers avoid unnecessary trips to the country. France also upped the travel advisory by two levels for Korea, advising its nationals to avoid nonessential travel to the country.

A growing number of cities in China have enforced quarantine measures against visitors from South Koreans without prior notice, fueling anger here.

On Tuesday, authorities in Weihai, Shandong province, imposed a 14-day mandatory quarantine on 167 passengers arriving on a flight from Korea, in the first country-specific compulsory restriction by China, which had earlier criticized other countries for imposing traveling restrictions.

Weihai is not the only Chinese city to take such precautionary measures. Qingdao in Shandong and Shenyang in Liaoning province have introduced similar restrictions on arrivals from Korea.