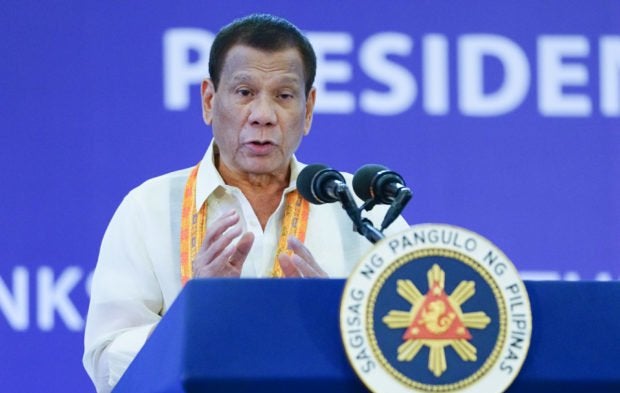 “I accept the apology, of course,” Duterte said in an ambush interview on Wednesday.

Duterte said he would let Congress decide on ABS-CBN’s franchise renewal, stressing that it must come from the House of Representatives.

“But fundamentally, really, ang (the) decision nasa (is with the) House ngayon (now), not so much of the Senate because the Constitution says all of these things must originate from the Lower House. Forget about all these hullabaloo,” Duterte said.

“The critical move is in the House and I tell you I am not going to interfere. Wala talaga ako (I really won’t),” he added.

The President also said the P2.6 million-worth of unaired campaign advertisements during the 2016 national elections that the network was not able to refund him should just be donated to charity.

During Monday’s Senate hearing on the media giant’s franchise, ABS-CBN President and CEO Carlo Katigbak has apologized for any hard feelings that the network’s airing of the former Senator Antonio Trillanes IV’s political ad has caused to the President.

Katigbak likewise explained that circumstances that transpired that led to ABS-CBN’s failure to air some of Duterte’s local advertisement during the 2016 elections.

According to Katigbak, ABS-CBN was not able to air P7 million worth of local ads but was able to refund about P4 million to Duterte.

He said there was a delay in refunding the remaining P2.6 million, which was “no longer accepted by the President.”

The President likewise denied having a hand on the Office of the Solicitor General’s quo warranto petition against the network, saying he cannot stop him from doing so.

“Ang problema kasi nitong sa SolGen, once he makes an official statement that there is a violation of law, then stoop na ako. Parang, hindi na ako makagalaw. I cannot tell him ‘Stop’,” Duterte said.

(The problem with the SolGen is that once he makes an official statement that there is a violation of law, then I will stoop. I can’t move. I cannot tell him, “Stop.”)

Duterte explained that the SolGen does not “clear” with him unlike the Secretary of the Department of Justice (DOJ).

“The SolGen does not clear with me unlike the Secretary of Justice. He will call my attention or he will bring it up in the Cabinet. Ang SolGen hindi (The SolGen doesn’t). He studies and he goes to the public and say, ‘There is a violation here’,” Duterte said.

On February 10, Solicitor General Jose Calida filed a quo warranto petition before the Supreme Court to void ABS-CBN’s franchise due to “abusive practices.”

But ABS-CBN has denied allegations that it violated terms of its legislative franchise and said the petition was only an effort to shut down the network.

Read Next
If PH can’t be self-reliant, choose: Be a US territory or China’s province – Duterte