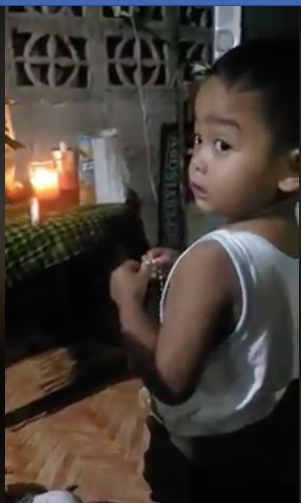 CEBU CITY, Philippines— Can you remember at what age you started memorizing prayers or have that “rosary praying” skill?

Maybe to some they can remember memorizing it when they started going to school.

But  this young boy from San Francisco,  Camotes, Cebu, will make your jaws drop because of his amazing skills in memorizing and reciting Cebuano prayers at such a young age.

Meet Airek Francesco Marquez, the viral three-year-old boy and a daycare pupil, who was seen reciting and leading the rosary in Cebuano on a video posted last February 22 by his aunt, Mary Joyce Montalban, 28.

In the video, you can see and hear Marquez leading and holding the rosary during their evening rosary in Cebuano for the Lady of the Barangays.

Montalban told CDN Digital that she wanted to capture the moment because it was such a rare occasion when a young boy would lead praying the rosary, let alone reciting prayers in Cebuano.

She also mentioned that Marquez’s skills in memorizing and reciting the prayers were honed by his parents, Vine Grace and Jhynnford Marquez, who are both teachers.

(I was surprised at how fast he learned to pray the rosary, but he is a fast learner.)

Although Marquez is already very good in memorizing and reciting the prayers in Cebuano, he is still learning how to properly use the rosary beads, but he is close to mastering them with the help of his family during their evening prayers.

With the confidence and grace shown by Marquez in the video, it is not a surprise that as of February 29 the video has already been viewed 2 million times, with 60,000 shares, 31,000 reactions and 3,600 comments.

With netizens also applauding Marquez for a job well done.

Marquez for sure will set a very good example to his younger siblings, Sofia, 2 and his three-month-old baby brother, Aivar. /dbs