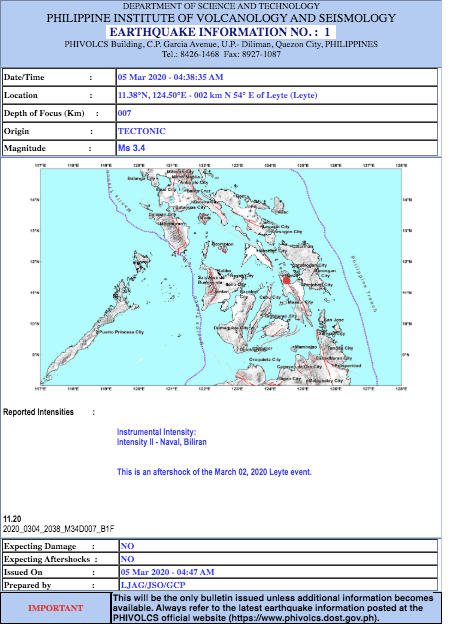 A magnitude 3.4 quake, tagged as an aftershock of the March 2-Leyte earthquake, was felt in Eastern Visayas on Thursday, March 5. Its epicenter traced to about two kilometers east of Leyte. (Screengrab from Phivolcs)

On Thursday morning, March 5, state seismologists recorded a magnitude 3.4 quake with its epicenter traced to about two kilometers east of Leyte.

The Philippine Institute of Volcanology and Seismology (Philvocs), in their earthquake information bulletin, said the ground tremor recorded at 4:38 a.m. “is an aftershock of the March 2, 2020 Leyte event.”

The ground shaking was felt at Intensity 2 in Naval, Biliran.

According to the Phivolcs Earthquake Intensity Scale (PEIS), an intensity 2 quake is considered as weak tremor that can be felt by few individuals who are “at rest indoors.”

At past 11 p.m. on March 3, a magnitude 4.1 earthquake tagged as an aftershock of the March 2-earthquake was also felt in several areas in Eastern Visayas.

The ground shaking with its epicenter was about a kilometer east of Leyte was felt at intensity 3 in the towns of Leyte, Capoocan, Kananga and Ormoc City in Leyte province; Naval, Cabucgayan and Almeria in Biliran province.

It was also reported to have been felt at intensity 2 in Tabango and Alangalang in Leyte and at intensity 1 in Borongan City, Eastern Samar and Palo, Leyte. 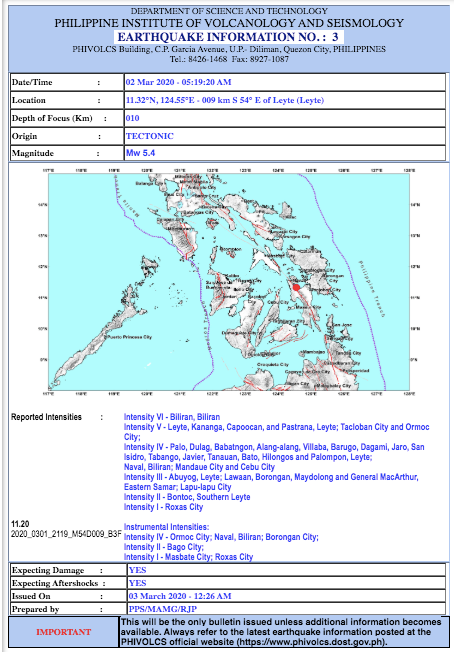 The updated earthquake information bulletin of the March 2, 2020-Leyte earthquake. (Screengrab from Phivolcs)

The March 2 earthquake was first reported by Phivolcs as Magnitude 5.7 strong.

The earthquake’s epicenter was at about 9 kilometers east of Leyte. It was felt in most of Eastern Visayas, parts of Central Visayas including Cebu, and some areas in Western Visayas. /bmjo