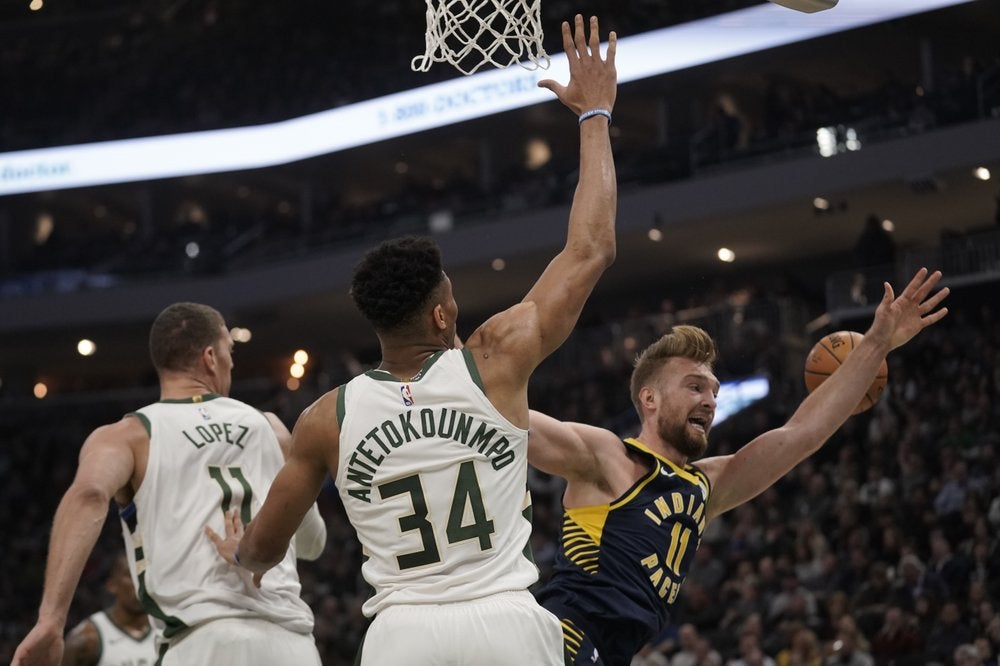 Indiana Pacers’ Domantas Sabonis is fouled as he drives past Milwaukee Bucks’ Brook Lopez and Giannis Antetokounmpo during the first half of an NBA basketball game Wednesday, March 4, 2020, in Milwaukee. | AP Photo

The Bucks bounced back from a 105-89 loss at Miami in which they posted their lowest point total of the season. An NBA-best 53-9, Milwaukee hasn’t lost back-to-back games all season.

Indiana had a four-game winning streak snapped as it fell into a tie with Philadelphia for fifth place in the Eastern Conference standings. The Pacers also lost guard Malcolm Brogdon to a sore left hip in the second quarter.

The Pacers were without Victor Oladipo for the second straight game because of a sore right knee. Milwaukee was missing reserve guards George Hill (groin contusion) and Kyle Korver (back soreness).

This game marked a return to form for the NBA’s highest-scoring team.

After scoring at least 100 points in 83 consecutive regular-season games – the third-longest streak in NBA history – the Bucks failed to reach the century mark in a 93-85 victory at Charlotte on Sunday and their loss at Miami.

But they got there with time to spare Wednesday. with Eric Bledsoe hitting a 3-pointer to give the Bucks a 101-81 edge with 9:02 left.

Khris Middleton had 20 points and Donte DiVincenzo matched a career high with 19 for the Bucks. Bledsoe added 16 and Wesley Matthews had 15.

T.J. Warren scored 18 points and Doug McDermott had 16 for the Pacers. Domantas Sabonis had 15 points and 10 rebounds, while T.J. McConnell had 14 points.

Milwaukee led 33-11 less than 10 minutes into the game but missed all eight of its 3-point attempts in the second quarter as its halftime advantage shrunk to 58-56.

In the opening minute of the third quarter, the Pacers forced the first tie since a 2-2 start. The Bucks responded a few minutes later by taking a 78-64 lead with a 15-2 run that culminated with Matthews banking in a 3-pointer.

The Bucks stayed in front by double digits the rest of the way and led by as much as 28.