Government officials, specifically members of the police force, must understand that one cannot claim to love the nation and yet promote historical ignorance.

The Manila Police District (MPD) came under fire last week after it reposted in its official Facebook account a meme by an anonymous group called Red Alert red tagging GABRIELA and accusing it of manipulating the Lolas “for show”.

The picture used was that of the rally organized on March 2 by the FlowersforLolas Campaign in front of the Japanese Embassy. The rally was part of the commemoration of women’s month and was meant to reiterate the victims’ long-running demand for justice from the Japanese government. 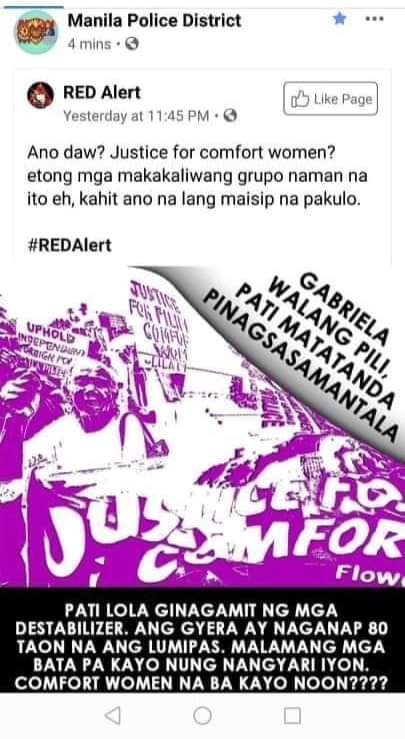 The FlowersforLolas Campaign, to which this author is a member,  is dismayed by the utter disrespect and gross ignorance of history exhibited by the MPD elements.

Led by Lila Filipina, I personally met some of the Lolas, including Lola Rosa Henson who was the first to come out, as a reporter in the late 90s when I covered their brave journey in telling the world about this inhuman practice of the Japanese during the war.

Due to their  tender age then, it was a painful experience for them to be subjected to sexual slavery, rape and other forms of sexual violence during World War 2.

The victims  have spent their lives in misery, having endured physical injuries, pain and disability, and mental and emotional suffering. The Lolas are dying without receiving  a formal apology and legal compensation from Japan. And yet the MPD has been a conduit in disrespecting their plight.

Artist Monique Wilson also lambasted the MPD, saying that such act is not only  completely and utterly imbecilic, but it is a grave affront to the Lolas who have suffered for over 70 years as former sex slaves of WW2, and the continuing neglect and dismissal of their fight for justice over all these long decades.

Issues like violence against women and historical injustices are not matters for trivialization nor excuse for red-tagging, especially not from an institution known for its crude human rights record, she said.

“How gravely insulting to them to even make accusations that they can be ‘used’, and to belittle, diminish and question their experience,” Wilson said. “It is your duty to educate yourselves on the history of the Lolas, and immerse yourself in the continuing and deepening understanding and consciousness on violence against women issues and how to end  it. Not be the continuing perpetrators  of all forms of abuse.”

“Take this time to reflect on your blatant fascist misogyny. You are mandated to serve  and protect the people, not villify and cause harm and insult with your ignorance,” Wilson said.

The MPD has taken down the post last Thursday, but it did not issue any apology to the Lolas.

Perhaps it is timely that the MPD must watch the ongoing Rody Vera’s “NANA ROSA” play at the UP Diliman for them to be properly educated of the comfort women issues.

It  is a heartwarming Dulaang UP play which seeks to remind the younger generation that Filipina comfort women existed. It pays homage to the courage they displayed when they went public with their story.

From their original number of more than 200 in the late 1990s, less than 50 survivors are still alive, highlighting a sense of urgency for them to receive a formal apology and legal compensation from Japan while their voices can still be heard.

It has been almost 75 years since the war ended on August 15, 1945, and yet the Japanese government refuses to recognize its official accountability to the victims of sexual  slavery.

Justice has not been given to the Lolas as their fight for unequivocal public apology, accurate historical inclusion, and just compensation continues up to this day.

The FlowersforLolas is an alliance of organizations that includes Lila Pilipina, the organization of Filipino Comfort Women; the Malaya Lolas who are victims of rape by invading Japanese soldiers in Candaba, Pampanga; the Association of Descendants of WaChi guerrillas who fought alongside American soldiers and Filipino guerrillas against the Japanese, and MEMORARE Foundation, composed of descendants of American victims of WW2. Also among its members are prominent individuals who have long been involved in the issue and other patriotic causes.

Kule is the monicker of Philippine Collegian, the official student publication of UP Diliman.

Read Next
Fruits to help protect one’s body against diseases