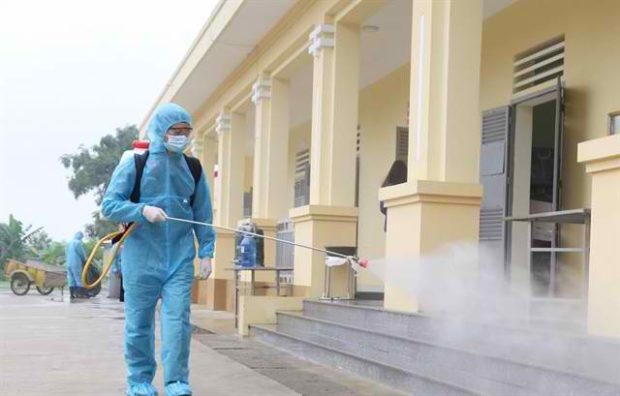 Sunday’s 19 new infections are the largest single-day rise in the country and bring the total to 113.

The seven announced in the evening, all Vietnamese nationals, were in Hà Nội.

The 107th patient was a 25-year-old woman and is the daughter of the 86th patient, who was one of two nurses at Bạch Mai Hospital who tested positive for SARS-CoV-2 on Friday.

The other six patients were all quarantined upon arrival in Việt Nam.

The 108th patient was a 19-year-old man studying in the UK. He returned to Việt Nam on Wednesday on Vietnam Airlines flight VN054 on seat 3K.

The 109th patient was a 42-year-old male university lecturer in the UK. He returned to Việt Nam on March 15 on Thai Airways flight TG560 on seat 37E, after transiting through Bangkok.

The 110th patient was a 19-year-old student in the US. He returned to Việt Nam on March 19 on Japan Airlines flight JL571 on seat 1A, after transiting through Japan. He contacted a person who was confirmed infected in the US.

The 111th patient was a 25-year-old female student in France. She returned to Việt Nam on March 18 on Vietnam Airlines flight VN018 on seat 36D.

The 112th patient was a 30-year-old student in France. She contacted people with symptoms of coughing and fever at a Vietnamese phở shop, where she worked as a part-time job in France.

The 133rd patient was an 18-year-old woman and is a student in the UK.

All patients are under treatment at the Hospital for Tropical Diseases in Đông Anh District and in stable health conditions.

The seven announced in the evening, all Vietnamese nationals, were in HCM City and the Mekong Delta region.

The 100th patient was a 55-year-old man in HCM City’s District 8. He has diabetes and arthritis. He flew from Malaysia’s Kuala Lumpur to Việt Nam on AirAsia’s AK524 on March 3 and was instructed to isolate at home.

However, from March 4 to 17, he attended religious ceremonies five times a day at Jamiul Anwar Mosque at No157B/9 Dương Bá Trạc Street in HCM City’s District 8. Despite having no symptoms of COVID-19, the district medical centre on March 18 took test samples from all members of the mosque who had attended religious ceremonies in Malaysia in recent days. HCM City Pasteur Institute confirmed the positive result on Sunday. He is now being treated at the city’s Hospital for Tropical Diseases.

Four other cases arrived on Vietnam Airlines’ flight VN0050 from the UK to Cần Thơ Internâtionl Airport on the morning of March 18. None showed any symptoms when they arrived and were sent to the collective quarantine area immediately.

Two more cases were confirmed in the Mekong Delta province of Trà Vinh’s collective quarantine area. They were both on AirAsia’s flight AK575 from Malaysia to Cần Thơ International Airport on March 18. They did not show any symptoms of COVID-19 and were sent to the quarantine area.