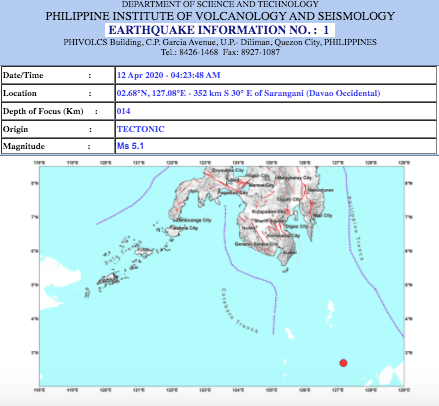 A magnitude 5.1 earthquake was recorded some 352 kilometers south of Sarangani, Davao Occidental on Easter Sunday, April 12, 2020.

Since midnight, the Philippine Institute of Volcanology and Seismology (Phivolcs) has recorded 22 ground tremors with strengths ranging from as low as magnitude 1.6 to as high as magnitude 5.1.

The first earthquake was logged at 12:11 a.m. with a strength of magnitude 2.7 and with an epicenter located 15 kilometers north of Sibagat, Agusan del Sur.

A magnitude 2 earthquake was also recorded some 5 kilometers north of Antequera town in the island province of Bohol while magnitude 2.8 and 1.9 tremors were also logged in Northern Samar and Southern Leyte provinces, respectively.

The strongest of the earthquakes, a magnitude 5.1, was recorded around 352 kilometers south of Sarangani, Davao Occidental.

Although no damages are expected from the earthquakes, Phivolcs warned residents of possible aftershocks from the ground movement which was recorded at 4:32 a.m.

According to the Phivolcs information bulletin, the earthquakes were tectonic in origin.

In October and November 2019, several areas and properties in the Davao region in Mindanao were also damaged due to a series of earthquakes that hit the region. / dcb

Read Next
Quarantine recipes that are trending on social media