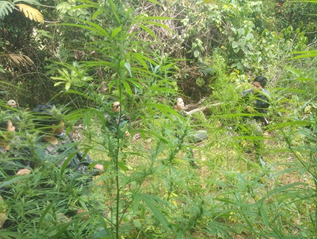 In a statement sent to the media, Police Colonel Randy Korret, CMFC chief, said the confiscated and destroyed marijuana had a total value of P1.2 million.

Korret said they received an anonymous tip that marijuana plants were being grown on hilly terrain in Barangay Adlaon, one of the city’s hinterland villages.

Initial investigations showed that the prohibited plants were farmed on a timberland area.

No suspect was held in custody however, Korret said they are now tracing the identity of a certain “Makoy” believed to be the one responsible for cultivating marijuana in the area.

This is not the first time marijuana plantation sites were discovered in Sitio Bayabas in Barangay Adlaon, prompting police to plant these areas with bamboo.

“The plantation site will form part of our incoming programmed project for reforestation wherein local bamboos will be planted on the site so that marijuana planters will not use it for planting illegal drugs in the future but will form part of their livelihood by selling bamboos for furniture four years after planting,” Korret said.

It can be recalled that in February, police also discovered a marijuana plantation site in Sitio Bayabas, Barangay Adlaon. /rcg

Read Next
Vans, ambulances being used to ‘smuggle’ persons out of Cebu City for a fee?