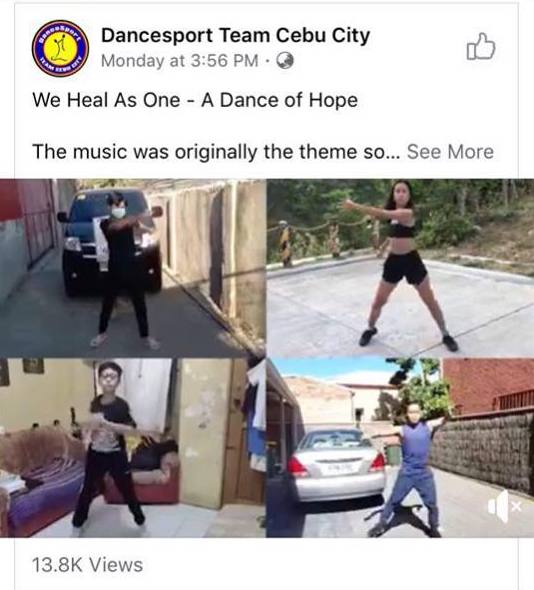 CEBU CITY, Philippines — DanceSports Team Cebu City (DTCC) came up with a dance video to continue to inspire frontliners who are risking their lives in the fight against the dreaded coronavirus disease 2019 (COVID-19).

“What the frontliners need the most is moral support. If they know the people are grateful and wish them well,  its the most valuable thing for them,”  said DTCC co-director Edward Hayco.

Hayco said he got the inspiration to produce the dance video after watching another video featuring different Filipino artists singing the song “We Heal As One.”

“I thought it would also be a good way to thank and show support to the frontliners,  if we interpreted the song thru dance,” said Hayco.

Hayco said that he also wanted to give comfort to people like his former classmate, whose three children work as doctors by profession.  All of his children are in the frontline in the fight against COVID-19.

“I could feel his fears and concerns. That the frontliners are at many times extremely tired and emotionally affected. And hopefully thru our dance of hope, our very humble way of telling them that we’re grateful for their sacrifices,” Hayco said.

Although confident that many dance athletes would want to join in recording their dance video, Hayco said that the implementation of the enhanced community quarantine (ECQ) was the biggest obstacle that they had to overcome.

Some of their members live in the cities of Cebu and Talisay while there are also those who are now staying in Australia.

This made him come up with an idea to allow performers to individually record their segment of the dance video which his daughter, Evonne, put together, Hayco said.

We Heal As One – A Dance of Hope

We Heal As One – A Dance of HopeThe music was originally the theme song of this year’s SEA Games, where our country came out victorious. It was brilliantly transformed into a battlecry song for a nation gripped with fear. Through this dance tribute, Dancesport Team Cebu City would like to express to the frontliners, government leaders, and the men and women in uniform, how deeply grateful we all are. It is through your courage and dedication that our nation will once again emerge victorious and win as one! #AmpingCebu #IngatPilipinas

Rendon said it took them one week to complete the choreography.  He had Evonne perform the dance which he recorded and send it out to each of the performers for them to practice on.

(It was difficult to do but was worth doing.)

Rendon said that it took dancers three takes to record their segment of the dance video.  They had to make sure that they had the perfect shot and angles that they needed.

He also had to communicate with each of their performers through text messages, group chats, and video calls, but the experience was all worth it.

“I liked the idea of Sir Ed to do a dance for the music. At these challenging times people in the frontline need some support, encouragement, and compassion. With the dance video (that) we made, at least they can see that we are with them.”

For Hayco, producing their dance video was a totally different experience for DTCC members.

“The experience of producing the video was meaningfully fulfilling for us. Our only wish is that enough people can share it so it will reach the intended viewers, the frontliners,” said Hayco. / dcb