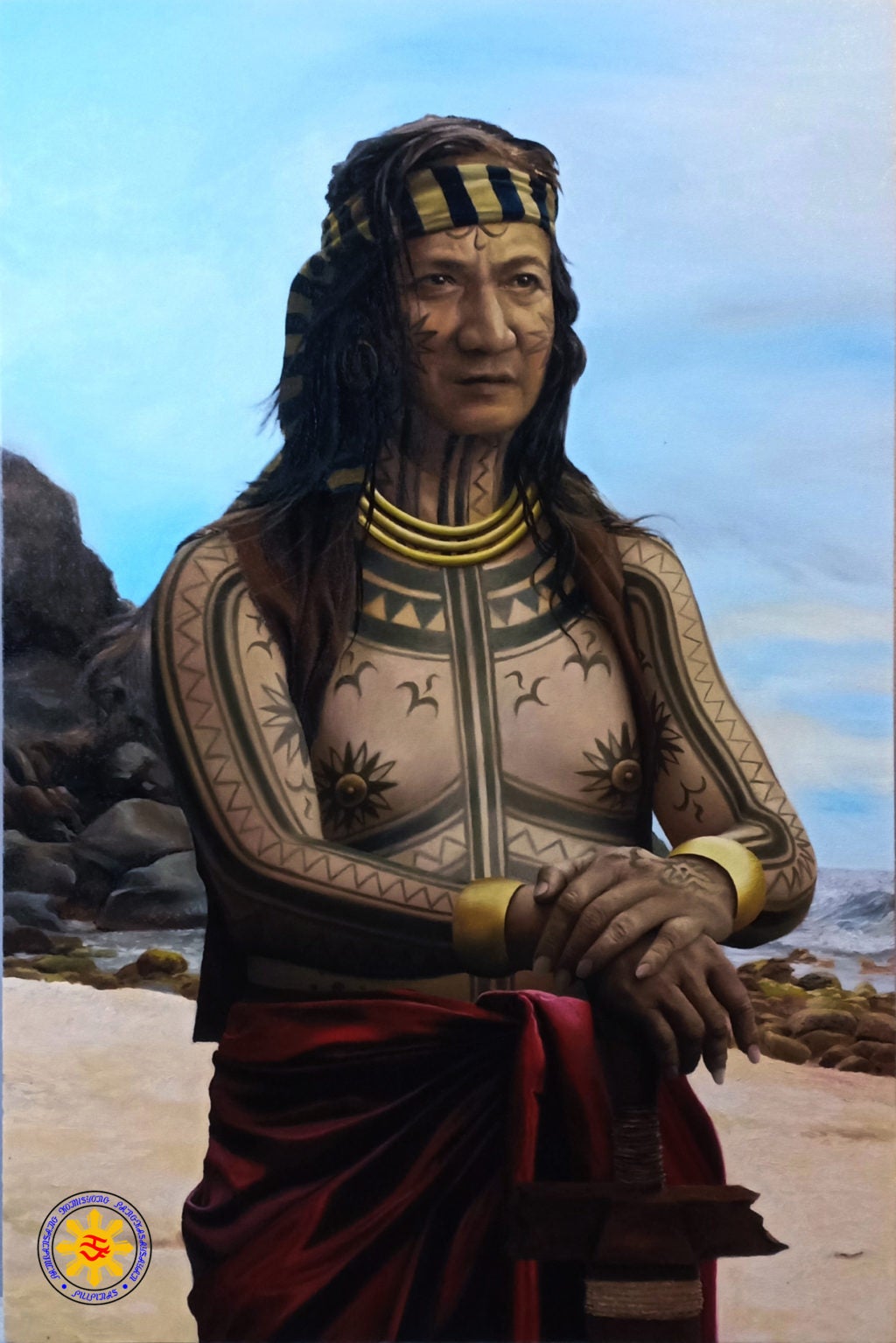 The National Historical Commission of the Philippines (NHCP) on May 7, 2020, released a new portrait of Datu Lapulapu. The “photo-realistic” painting was done by Carlo Caacbay from Bulacan. | via National Quincentennial Committee of the Philippines

CEBU CITY, Philippines — State experts on Thursday, May 7, 2020, released to the public a ‘photo-realistic’ painting of Datu Lapulapu.

The National Historical Commission of the Philippines (NHCP) unveiled the new portrait of Datu Lapulapu from Mactan Island in line with the 499th anniversary of the Victory at Mactan, Historic Sites Development Officer Eufemio Agbayani III said in a statement posted on the website of the National Quincentennial Committee of the Philippines.

Agbayani said the new photo provided a glimpse on Lapulapu’s age as well as highlighted the importance of the latter’s tattoos as symbols of experiences and accomplishments.

“The portrait’s striking difference with early depictions of Lapulapu is the honoree’s aged appereance,” he said.

The newly released portrait of Lapulapu, the country’s first hero, was painted by Bulacan-based artist Carlo Caacbay in 2019.

In his statement, Agbayani said that the NHCP has ‘subscribed’ to the findings of historian Danilo Gerona, claiming Lapulapu to be in his elderly ages.

“The NHCP subscribed to the recent findings of historian Danilo Gerona about the possible age of Lapulapu. According to his book, Ferdinand Magellan: The Armada de Maluco and the European Discovery of the Philippines (2016), Gerona consulted the 1563 book of Portuguese historian Gaspar Correa titled Lendas da India,” Agbayani explained.

“The said publication claims Lapulapu was very old.  Gerona further said that Correa probably got the information from one of the survivors of the Magellan-Elcano expedition he interviewed,” he added.

Compared to previous portraits of Lapulapu, the new one was noted to provide a clearer glimpse of the hero’s tattoos which were ‘patterned after an illustration to Visayan people in the ca. 1590 Boxer Codex’.

“These tattoos were not merely decorative, as these indicate the bearer’s experiences, achievements and triumphs in battles and sea encounters,” said Agbayani.

“(The gold ornaments were) also patterned after those illustrated in the Boxer Codex and excavated in various parts of the Philippines in the collections of the Ayala Museum and the Bangko Sentral ng Pilipinas Museum,” Agbayani stated.

As part of NHCP’s mandates, the new portrait of Lapulapu is expected to be displayed in public schools and government offices ‘in lieu of the usual portraits of incumbent government officials’. /dbs

Read Next
Janine Berdin graces CDN Digital’s Lockdown: A break from the outbreak