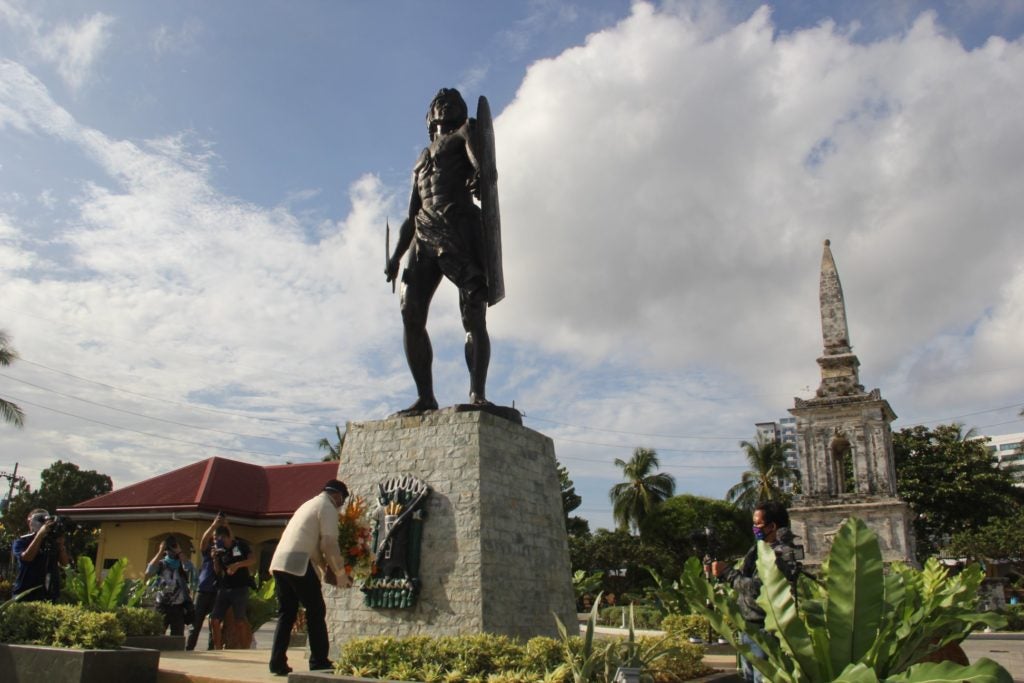 Mayor Junard Chan led the floral offering at the statue of Datu Lapulapu in Barangay Mactan to commemorate the historic battle that gave the Filipinos its first victory against foreign invaders 499 years ago. | Photo courtesy of Lapu-Lapu City PIO

CEBU CITY, Philippines – Threats of the coronavirus disease 2019 (COVID-19) did not stop Lapu-Lapu City officials led by Mayor Junard Chan from commemorating the historic Battle of Mactan which happened 499 years ago.

While they adhere to social distancing policies, city officials gathered at the Liberty Shrine in Barangay Mactan early this morning, April 27, 2020, to offer flowers that were freshly picked from their respective backyards at the statue of Datu Lapulapu.

“The basket (of flowers)  is a humble one, prepared by their families, as flower shops are all close in this time of crisis,” said an advisory that was posted on the official Facebook page of the City’s Public Information Office (PIO).

Others brought flowers which they got from the garden of the Shangri-La’s Mactan Resort and Spa Cebu since flower shops in the city were ordered closed since the start of the implementation of the enhanced community quarantine on March 29.

Joining Chan were Vice Mayor Celedonio Sitoy, City Councilors, and officials of the City Tourism Office and the Cultural and Historical Affairs Commission.

As a precaution against the spread of the coronavirus disease 2019 (COVID-19), all those who attended the celebration wore face masks.  Chan, for his part, also had a bottle of alcohol with him.

“Mayor Chan did not fail the National Quincentennial Committee when it entrusted to him the decision to commemorate the 499th anniversary of the Victory at Mactan,” the PIO advisory said.

In a separate FB post, Mayor Chan apologized to the Opononganons for this year’s very “simple” commemoration of the Kadaugan sa Mactan because of the COVID-19 threat.

(I am appealing for your understanding because we are now faced with the COVID-19 crisis.  But whatever happens, I give you my assurance that we will be together in the fight for victory against this sickness that has already caused us so many sufferings.)