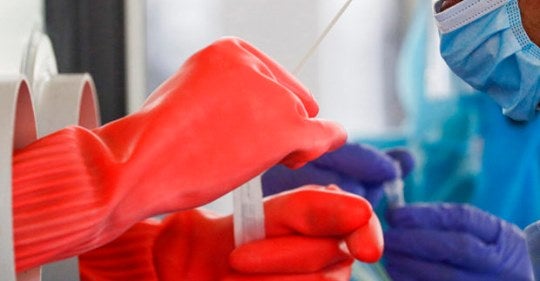 MANILA, Philippines — Several senators on Tuesday insisted that the government should bankroll the mass testing for the new coronavirus disease (COVID-19) after presidential spokesperson Harry Roque said it was up to employers to spend for the testing of their returning workers.

One of the senators said Roque’s admission on Monday that the government had “no program” for mass testing was akin to “admitting defeat without putting up a fight.”

“If we want to be successful in the fight against COVID-19, we cannot pass on this burden to the private sector. The government must show leadership and must have a strategic plan,” Sen. Joel Villanueva said.

Gov’t must finance it

Senate President Pro Tempore Ralph Recto said that Republic Act No. 11469, the law passed by a special session of Congress in March to enable President Duterte to respond to the coronavirus crisis, “mandates the government to improve our testing capacity in a reasonable and effective manner that reduces the spread of the virus.”

He said most of the small businesses, many of which have appealed to the government for bailout, would not be able to shoulder the cost of testing their workers.

“If the government mandates the private sector to test its employees, then [the government] must deploy financing for it,” Recto said.

“Public health is [the] government’s primary responsibility. Leaving the task of mass testing to the private sector is an irresponsible and unacceptable abdication by [the] government of its primary purpose, which is to protect its citizens,” Pangilinan said.

Speaking at his regular press briefing, Roque denied the report on a television station’s website that drew the disapproving comments from the senators.

Roque was quoted in the report as saying on Monday that the country was aiming to reach 30,000 tests daily. “But in terms of mass testing like 11 million in Wuhan, we don’t have a program like that yet, and we leave it to the private sector,” the report quoted him as saying.

Wuhan is the city in central China where the new coronavirus that causes COVID -19 emerged late last year.

On Tuesday, Roque said the term “mass testing” was wrong. It should be “expanded targeted testing,” he said, adding that “no country in the whole world has tested all of its citizens.”

“The key to testing is to work on benchmarks. It means testing 1 to 2 percent of the population of the entire country or, in case of an epicenter, up to 10 percent,” Roque said.

The government, he said, wants to test up to 10 percent of the population of Metro Manila, the epicenter of the new coronavirus outbreak in the country.

At her own press briefing, Health Undersecretary Maria Rosario Vergeire said the Department of Health (DOH) has an “expanded testing protocol” under which people who may have contracted the new coronavirus are tested.

“In the initial months of our response, we’re really focusing on the vulnerable cases, such as the severe and critical. But later on, because of this expanded testing policy, we were able to include those with mild symptoms but with exposure, and even the asymptomatics but with exposure are being tested now,” Vergeire said.

She explained that from the start, the DOH has been trying not to use the term “mass testing” because it is likely to be misinterpreted by the public.

“We try to veer away [from] this term because we want people to understand that this is not indiscriminate testing. If you say ‘mass testing,’ people will think that it’s the whole population, which is not the case. Expanded testing is focusing on those who need to be tested because of exposure and of symptoms,” she said.

Vergeire cited expert recommendations against testing asymptomatics, as “they are less likely to transmit the virus and may be missed even by RT-PCR (reverse transcription polymerase chain reaction) tests.”

Apart from testing, Vergeire said, effective contact tracing is also key to controlling the spread of the coronavirus.

Currently, there are 38,315 contact tracers nationwide. The DOH is hiring more health workers to meet the ideal number of contact tracers—126,000. So far, the DOH has identified and assessed 60,586 close contacts.

On Tuesday, the DOH reported 224 new coronavirus cases, pushing the national tally to 12,942. The bulk of the case, 174, were recorded in Metro Manila, accounting for 78 percent of the new infections.

The DOH reported that 114 more patients had recovered, raising the number of COVID-19 survivors to 2,843.

But the death toll rose to 837, with the deaths of six more patients.

In the Senate hearing, Minority Leader Franklin Drilon questioned the low testing rate two months after President Duterte placed the country on lockdown, but officials said the country was on track to achieve its goal of 30,000 tests daily by the end of May.

Vince Dizon, deputy chief implementer of the National Task Force COVID-19, said the goal was to test 2 percent of the country’s population and 10 percent of Metro Manila’s population.

Dizon said there were 36 accredited testing laboratories in the country, and the plan was to increase the number to 66 by May 31.

The priority is to green-light the high-capacity laboratories, he said.

In an online forum with foreign correspondents, Marikina Rep. Stella Quimbo said the economic stimulus bill filed in the House of Representaives included P20 billion for mass testing in metropolitan areas. —WITH REPORTS FROM LEILA B. SALAVERRIA AND ROY STEPHEN C. CANIVEL

Read Next
Duterte declares May 25 holiday for Eid’l Fitr