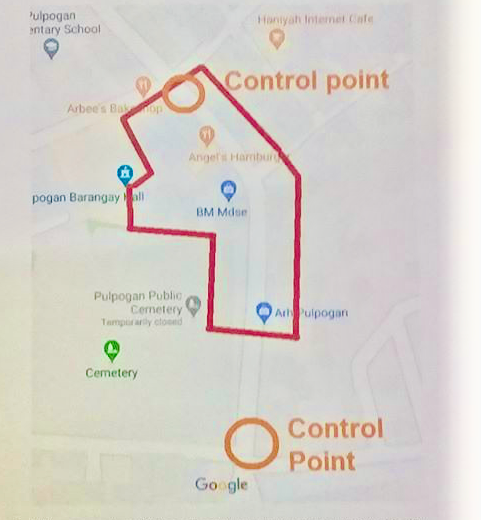 CEBU CITY, Philippines — Portions of a barangay in Consolacion, a northern Cebu town, have been declared as ‘red zones’ after a resident there tested positive of coronavirus disease 2019 (COVID-19) on Saturday, May 23.

Similar to being placed under total lockdown, residents within a red zone, based on the village captain’s orders, are mandated to stay in their homes unless during medical emergencies.

The EO also effectively suspended the validity of the residents’ quarantine passes, and that no one is allowed to go in and out of the red zone.

“Quarantine Passes shall not be (honored) during this time… All residents are not allowed to visit any family within the Red Zone, and to stop within the vicinity of the Red Zone,” stated the document which was published by the local government of Consolacion on Facebook.

Residents are expected to immediately report to their barangay in case any member of their family start to show signs of the disease.

Barangay officials also ordered all business establishments within the specified area to suspend their operations from May 23, 2020, to June 5, 2020 ‘or until the Red Zone declaration is lifted’.

The patient is currently admitted to a government hospital in Cebu City but was first referred to Eversley Child Sanitarium General Hospital in Barangay Jagobiao, Mandaue City after experiencing difficulty in breathing.

‘L is for rabbit’