‘Simple weddings’ only at the time of coronavirus 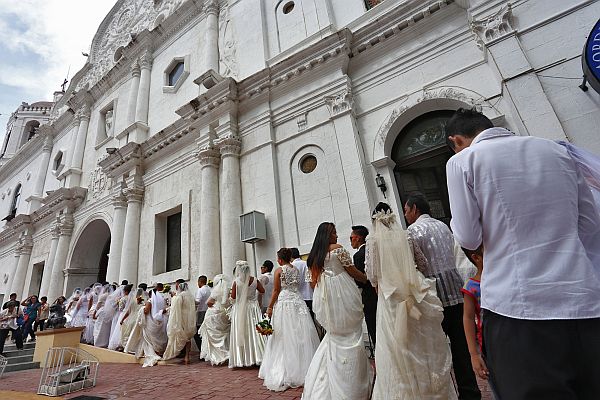 Couples prepare to say their “I dos” during a mass wedding in 2016. FILE PHOTO

CEBU CITY, Philippines — As the ‘wedding month’ draws near, the Archdiocese of Cebu reminds couples-to-be to keep everything simple amid the coronavirus disease 2019 (COVID-19) pandemic.

READ MORE: What to expect in Cebu churches under ‘new normal’

Among them were protocols during marriage ceremonies.

“We allow only simple weddings this year, namely, with only the bride and the groom, one set of principal sponsors and the immediate family present. Having more than one set of said sponsors is not allowed as of this time,” the Archdiocese said.

They also recommended for future couples to do ‘Rite of Marriage Outside the Mass’ as an alternative.

June is regarded as the ‘great month for couples’ to get married.

But due to strict physical distancing measures put in place by local authorities to curb the spread of COVID-19, churches all over the world were also constrained to modify several rules and even traditions.

Mass gatherings, such as wedding ceremonies and receptions, are also prohibited. Laws and ordinances have been passed to penalize individuals caught violating distancing protocols.

In Cebu, for instance, churchgoers are required to wear face masks when attending Holy Masses in churches that are allowed to open.

For churches belonging to areas still under a stricter enhanced community quarantine (ECQ), the Archdiocese said previously imposed rules will be sustained.

“There is no doubt that there will be challenges and frustrations. Our parishes need to learn new ways to cope with the ‘new normal’ after the ECQ, when we begin to celebrate the liturgy, especially the Holy Eucharist, with the faithful in attendance,” Palma said.

“But we believe that following these guidelines is a reasonable sacrifice for the interest of the common goal, and ultimately to best serve our own community,” he added.

Cebu, as an island, has recorded more than 2,000 COVID-19 cases, the bulk of which are found in the province’s capital, Cebu City.

Cebu City and Mandaue City remained under ECQ while the rest were allowed to transition to the general community quarantine where rules for the ‘new normal’ are being implemented. /dbs