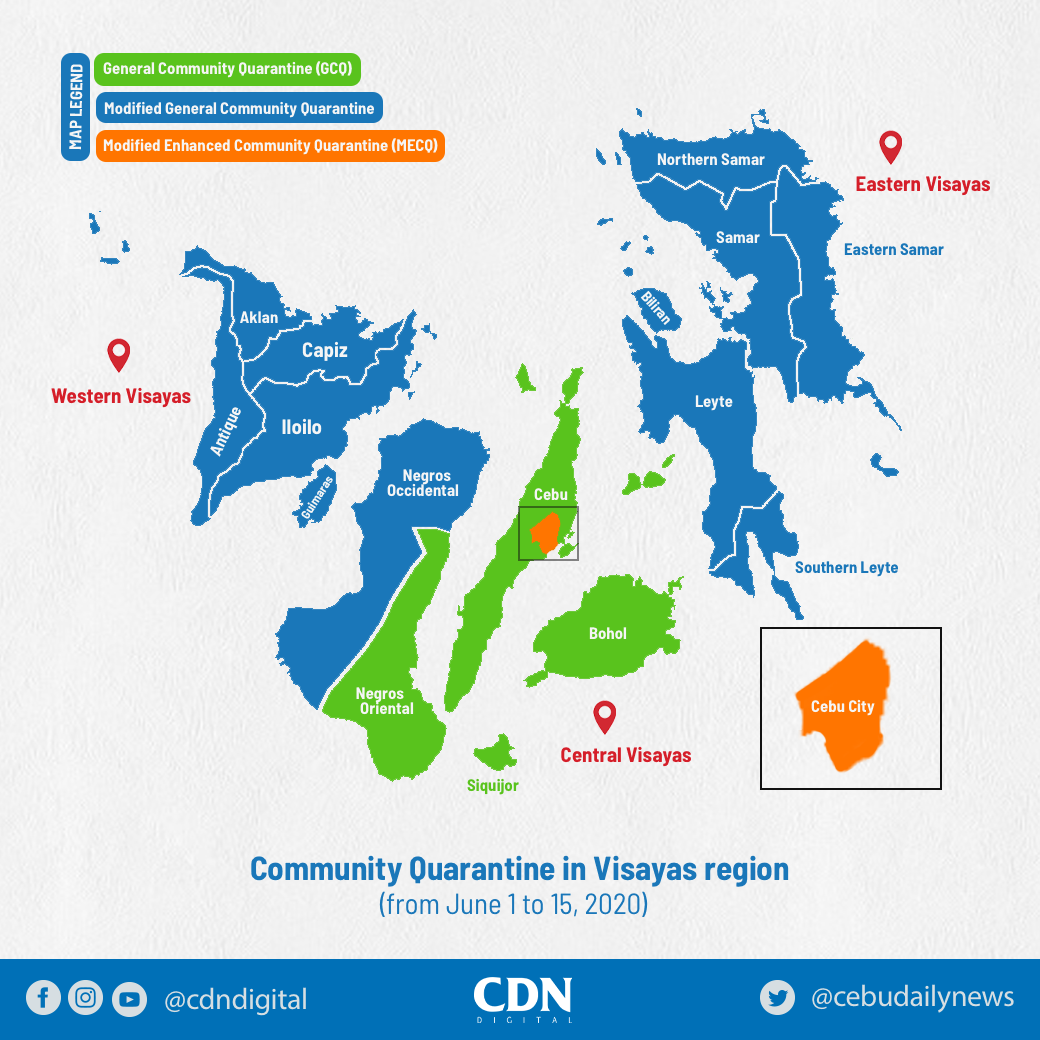 Cebu City is the lone area in Central Visayas and in the country under MECQ.

CEBU CITY, Philippines — With over 2,000 cases of the coronavirus disease (COVID-19), Cebu City will be implementing the highest level of community quarantine status among other local government units in the country until June 15, 2020.

The national Inter-Agency Task Force, in its Resolution no. 40 which was passed on Wednesday, May 27, classified Cebu City as a high-risk highly urbanized city, placing it under a modified enhanced community quarantine (MECQ) beginning June 1, while other high-to-moderate risk areas in the National Capital Region (NCR) shift to general community quarantine. 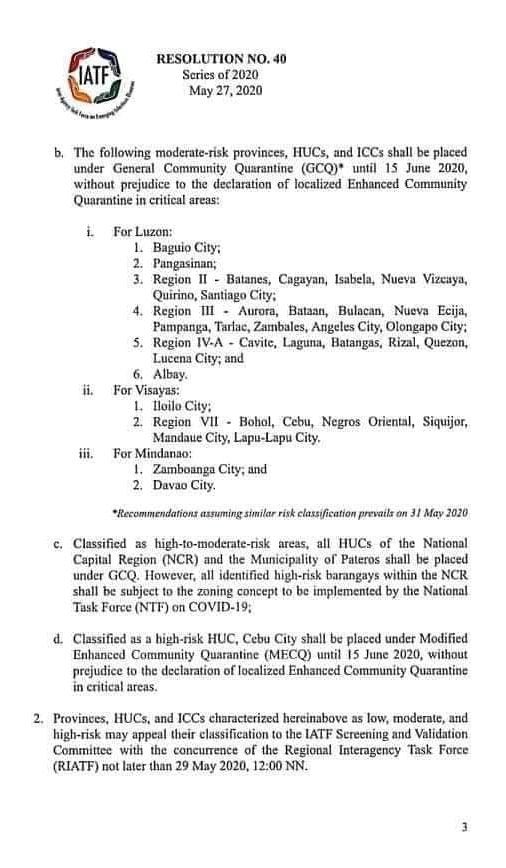 IATF Resolution no. 40, placing Cebu City under MECQ and the rest of Central Visayas under GCQ until June 15.

READ: Cebu City to shift to MECQ, rest of Central Visayas under GCQ until June 15

Mandaue City, which is currently under ECQ, will also be downgrading to GCQ along the rest of Cebu province, Bohol, Negros Oriental and Siquijor, and Lapu-Lapu City for the same period. 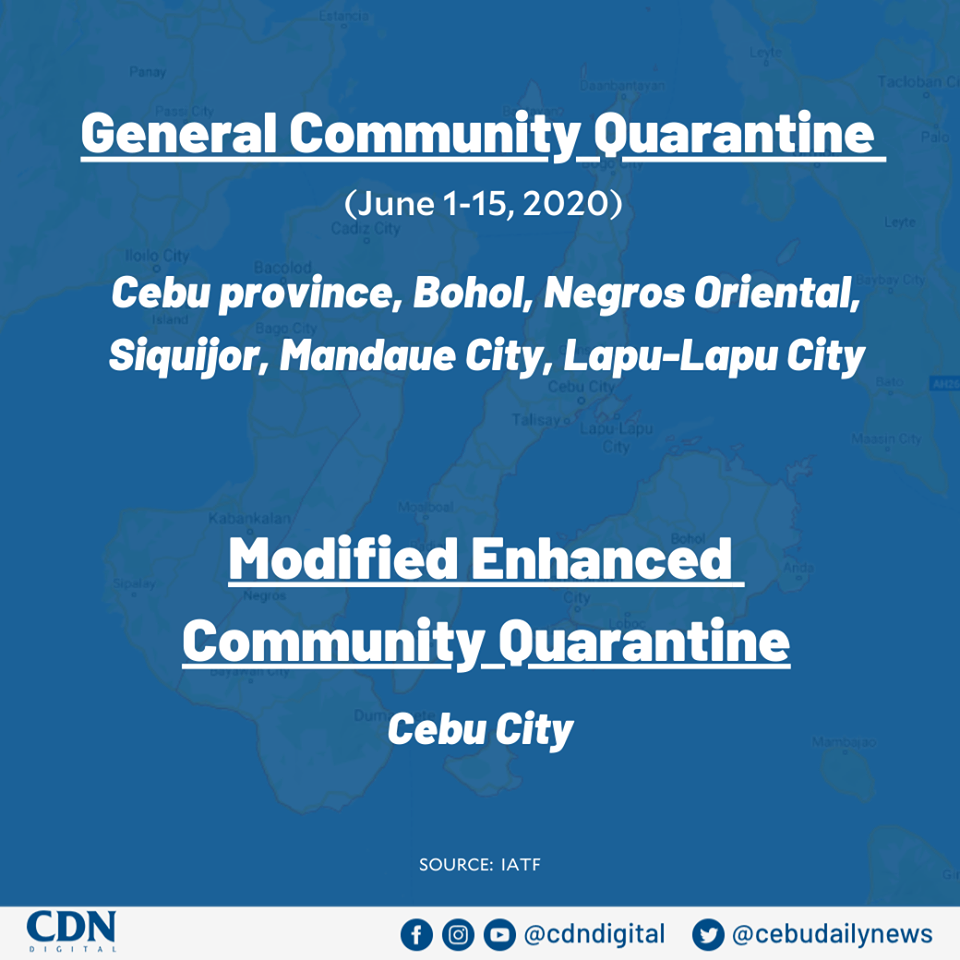 While the protocols here may slightly “relax,” the IATF said the LGUs may still impose localized ECQs in its critical areas.

IATF also ordered that COVID-19 Special Teams be activated in Cebu City and NCR cities of Manila, Quezon, and Parañaque “for surveillance and actions in high-risk barangays.”

The LGUs, however, may still appeal to IATF to be re-classified until May 29 as the task force is set to release their final classifications on May 31.

Last May 11, the IATF already recommended Cebu City to be under MECQ and the cities of Mandaue and Lapu-Lapu to be under GCQ. The tricities appealed to remain under ECQ pending the completion of the strategic rapid community testing but only the appeals of the cities of Cebu and Mandaue were granted.

According to IATF’s Omnibus Guidelines for the implementation of community quarantine, the MECQ status serves as the transition period of an LGU in shifting from an ECQ to a GCQ, where the stringent limits on movements, transportation, and business operations and the heightened presence of uniformed personnel are “relaxed and  becomes less necessary.”

Business Process Outsourcing (BPO) companies may also need to already operate without the need to set up on-site or near-site accommodation for their employees.

While other areas in Central Visayas have shifted to GCQ since May 16 and Cebu province on May 20, the Mandaue City Public Information Office (PIO), on its Facebook page this Thursday morning, said the city will release soon its guidelines in the implementation of the GCQ. /bmjo