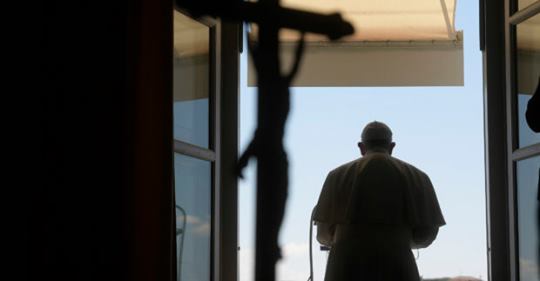 Pope Francis delivers his blessing from his studio window overlooking St. Peter’s Square at the Vatican, Sunday, May 31, 2020. Francis celebrated a Pentecost Mass in St. Peter’s Basilica on Sunday, albeit without members of the public in attendance. He then went to his studio window to recite his blessing at noon to the crowds below. The Vatican says police will ensure the faithful gathered in the piazza keep an appropriate distance apart. | Vatican News via AP

VATICAN CITY — Pope Francis is cautioning against pessimism as many people emerge from coronavirus lockdowns to lament that nothing will ever be the same.

During Mass in St. Peter’s Basilica to mark Pentecost Sunday, Francis noted a tendency to say “nothing will return as before.” That kind of thinking, Francis said, guarantees that “the one thing that certainly does not return is hope.”

He took to task his own church for its fragmentation, saying it must pull together.

“The world sees conservatives and progressives” but instead all are “children of God,” he said, telling the faithful to focus on what unites them.

“In this pandemic, how wrong narcissism is,” Francis said, lamenting “the tendency to think only of our needs, to be indifferent to those of others, and to not admit our own frailties and mistakes.”

“At this moment, in the great effort of beginning anew, how damaging is pessimism, the tendency to see everything in the worst light and to keep saying that nothing will return as before!” the pope said. “When someone thinks this way, the one thing that certainly does not return is hope.”

A few dozen faithful, wearing masks and sitting one to a pew, attended the ceremony as part of safety measures to avoid spreading COVID-19.

While the Vatican has re-opened the basilica to tourists, the rank-and-file faithful still aren’t allowed yet to attend Masses celebrated by the pope for fear of crowding.

In a videotaped message for the Pentecost service led by the Anglican church leader, Justin Welby, archbishop of Canterbury, Francis spoke of how during the pandemic people are required to keep a safe distance from each other. “Yet we have also come to understand, perhaps better, what others are experiencing. We have been brought together by fear and uncertainty.”

Francis encouraged prayers for those who must make “complex and pressing decisions,” which he said should be focused on investing in “health, employment, and the elimination of inequalities and poverty.”

“Now as never before, we need a vision rich in humanity. We cannot start up again by going back to our selfish pursuit of success without caring about those who are left behind,” the pope said.