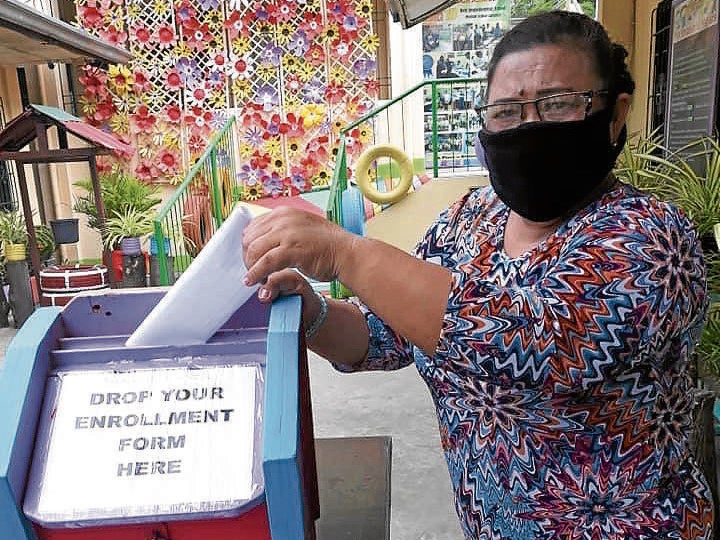 BACK TO SCHOOL Suzette Villamil-Punzalan, principal of Talang High School in Candaba, Pampanga, says the school has turned to manual enrollment due to the absence of internet connection in the town’s remote areas. | Contributed Photo

MANILA, Philippines — A high school principal in a remote area in Candaba, Pampanga province, held a face-to-face student registration during the first day of enrollment on Monday.

Suzette Villamil-Punzalan of Talang High School said she could not turn away parents who did not get the advisory on online enrollment due to restriction of movements in the face of the coronavirus pandemic.

“The Department of Education (DepEd) directed us to conduct online enrollment but seven parents came this morning because they don’t have internet connection at home, or digital mobile phones,” Punzalan told the Inquirer.

Noting she has to be flexible to accommodate the parents, Punzalan said the physical registration pushed through but at a safe distance from each other.

She documented the process with photographs to show that she and the parents wore face masks and kept a physical distance of about 2 meters.

She said she also asked the parents to drop the enrollment forms in a wooden box to avoid physical interactions.

In Albay province, a dropbox was placed at the main entrance of Ligao East Central School in Ligao City as it began accepting enrollees through a “no face-to-face contact” policy.“This is one way to avoid physical contact between teachers and parents and pupils,” said Alma Fajardo, the school principal.

The enrollees or parents were asked to drop the filled out enrollment forms that were distributed to the villages earlier, Fajardo said, adding that an online enrollment was also being done to accommodate students.

According to DepEd, the first two weeks of the enrollment period should be completely done remotely with no face-to-face interactions. Any form of physical enrollment would be allowed in the third week of June and in coordination with the local government.