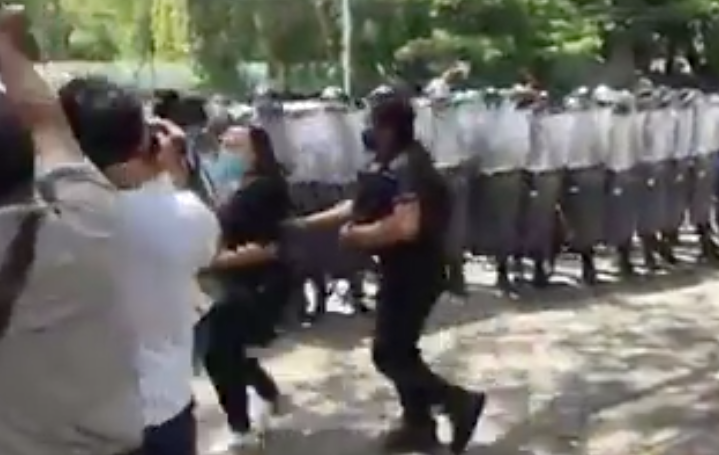 Screen capture from video of the Friday afternoon protest which BAYAN shared with CDN Digital.

CEBU CITY, Philippines –The gathering of protesters outside of the University of the Philippines Cebu campus on Friday was very “irresponsible.”

Protesters and leaders of cause-oriented groups compromised public health and “selfishly” endangered the community by staging the protest which exposed themselves and members of their family to the threat of the coronavirus disease, said a statement that was released by the Police Regional Office in Central Visayas (PRO-7) this Saturday morning, June 6, 2020.

The PRO-7 leadership stood by its decision to enforce the arrest of seven protesters and a bystander saying that these individuals have violated various prohibitions under the general community quarantine.  Their violations include mass gathering, the presence of a senior citizen in the group, resistance, and disobedience to persons in authority.

All these violated Section 4, Paragraph 12 of the GCQ Omnibus Guidelines in relation to the Bayanihan Heal as One Act, the PRO-7 statement said.

It added that policemen had to enter the UP Cebu campus while they pursued protesters who entered the university’s premises.

The PRO-7 statement said that protesters who sought comfort at the campus also pose a risk to the health of others who were inside the university’s premised then.

Read: Police: We did not violate UP-DND accord in UP Cebu incident

PRO-7 also questioned the presence of Jaime Paglinawan, head of the Bagong Alyansang Makabayan (BAYAN) in Central Visayas, during the protest.

It said that Paglinawan, a senior citizen, was supposed to be barred from leaving his home while Cebu City remains under GCQ.

The police have also accused Paglinawan of instigating the Friday afternoon protest.

“What then is a senior citizen Bayan Muna official doing in a supposedly student-led protest action? Clearly, he and his organization are capitalizing on the idealism or our students and youth to instigate disobedience and violence under the lame pretext of freedom of assembly and expression,” the statement reads.

Read: UP Cebu: Probe ongoing to see if UP-DND Accord was violated

Among those who were arrested with Paglinawan were Joahanna Veloso of National Union of Students of the Philippines; UP alumnus Al Ingking; Bern Cañedo of YANAT CEBU; Dyan Gumanao of Kabataan Partylist; Nar Porlas; and Janry Ubal of Food Not bombs Cebu and Clement Corominas, a bystander who happened to pass by the area.

The eight individuals remain detained at the Waterfront Police Station while police prepare for the filing of charges against them. / dcb