UP Cebu: Probe ongoing to see if UP-DND Accord was violated 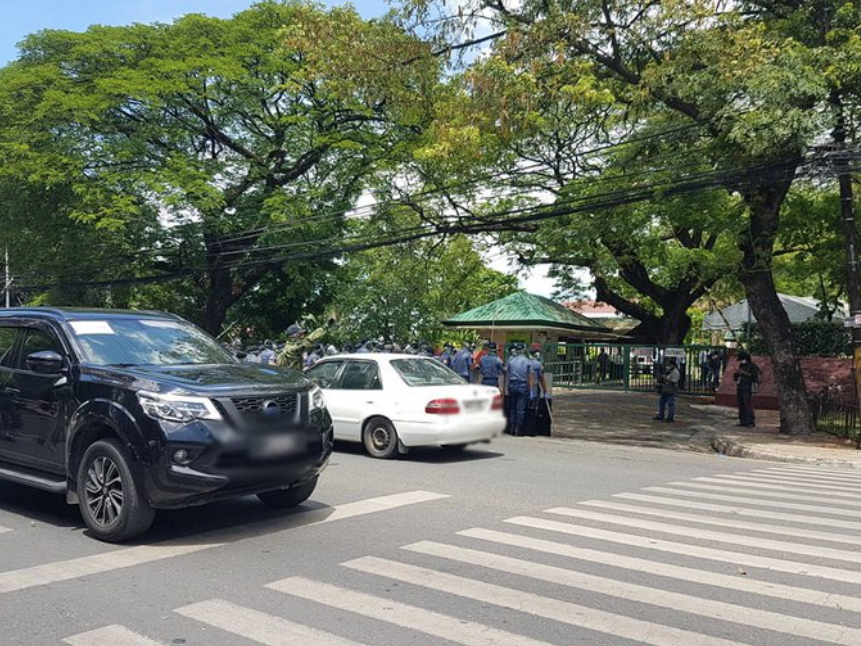 Police in full-riot gear disperse and arrest members of cause-oriented groups staging a protest against the anti-terrorism bill outside the University of the Philippines (UP) Cebu on Friday morning, June 5, 2020. | Alven Marie Timtim

CEBU CITY, Philippines — The University of the Philippines Cebu (UP Cebu) will be conducting an investigation on the tension that broke out between police and rallyists who staged a protest calling to scrap the Anti-Terror Bill (ATB) in front of the university premises.

UP Cebu Chancellor Liza Corro, in a statement issued to members of the media, said the administration was also coordinating with officials of UP System on the incident that happened on Friday morning, June 5 in Barangay Lahug, Cebu City.

Corro said among the things they would be probing were reports that law enforcers from Cebu City had allegedly violated an agreement between the UP and the Department of Defense (DND) entered 30 years ago.

“As we gather more facts on the ground about the incident, we are coordinating with UP System officials on the legal and other important aspects of the matter, especially with respect to the 1989 UP-DND Peace Accord,” said Corro.

The 1989 UP-DND Peace Accord bars state forces from conducting any operations inside any UP campuses.

The Chancellor, who is also a lawyer, said they were disappointed when the police did not notify university officials on the protest in which some participants fled to the campus seeking shelter.

Corro said the university could have helped in easing the tension if proper coordination was made.

“In any case, we are deeply disappointed that none of the police officers tried to coordinate with UP Cebu in regard to handling the situation which we hope could have led to a more sound and sensible resolution in light of prevailing restrictions under the general community quarantine,” she added.

READ MORE: Police: We did not violate UP-DND accord in UP Cebu incident

A protest-rally calling to scrap the Anti-Terror Bill was staged in front of UP Cebu on Friday morning, June 5. The event, however, escalated when tension broke between the police and the participants.

At least seven rallysists, including some students from various universities in Cebu, were brought to police custody in Camp Sotero Cabahug.

“The UP Cebu administration is deeply disturbed by the incident this morning of police dispersing and arresting peaceful protesters within the vicinity of the campus,” Corro said.

“It is most unfortunate that what happened today, with the presence and action of the police anti-riot contingent, heightened rather than allayed the risks to the safety of the people involved,” she added.

Meanwhile, Corro denied reports that the school’s security guards helped the police in dispersing protesters, and that they allegedly blocked students from entering UP Cebu.

“On the contrary, our guards blocked the police from entering the campus and even chased them out when they jumped into our walls trying to chase the student protesters. Our guards also assisted the students by bringing them into safety inside a campus building,” said Corro.

She also said the university will be extending help to the entire UP Cebu community who had been affected by the incident. /dbs

TAGS: Anti-Terror Bill in front of UP Cebu on Friday, June 5, University of the Philippines Cebu, UP Cebu Chancellor Liza Corro, UP Cebu: Investigation ongoing to determine if UP-DND Accord was violated, UP-DND Accord of 1989