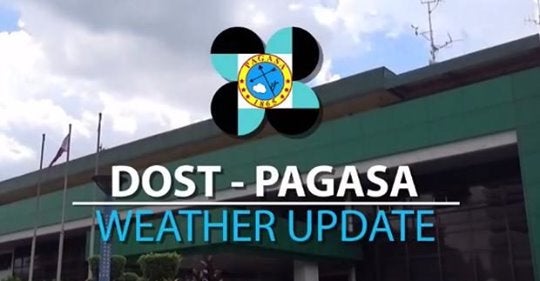 The ITCZ and easterlies or warm winds coming from the Pacific Ocean will also bring partly cloudy to cloudy skies with scattered rain showers or thunderstorms to Palawan, Visayas and the rest of Mindanao, the Philippine Atmospheric, Geophysical, and Astronomical Services Administration (Pagasa) said in its 4 a.m. update.

Partly cloudy to cloudy skies with isolated rain showers or thunderstorms will likewise be experienced in Metro Manila and the rest of the country due to easterlies and localized thunderstorms, said Pagasa.

According to Pagasa weather specialist Meno Mendoza, the isolated rain showers and thunderstorms in some parts of the country may occur in the afternoon or evening.

(Because of the ridge of the HPA in Northern Luzon and due to easterlies, there will be fair weather with possible isolated rains in the afternoon or evening.)

Read Next
In Talisay City: Hospital worker, 2 others test positive for COVID-19