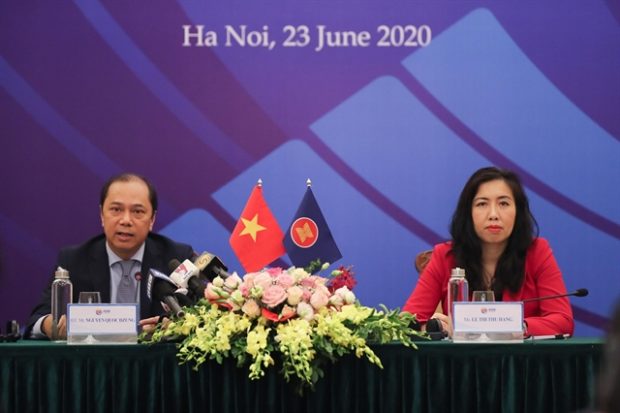 HANOI — The Association of Southeast Asian Nations (Asean) and China are expecting to set the time and date for resumption of delayed negotiations on the highly anticipated Code of Conduct (COC) for the South China Sea as part of their discussions on cooperation issues.

“It’s regrettable that due to COVID-19 pandemic, we haven’t had any meeting regarding COC since the beginning of 2020,” Dũng said, adding that the last meeting was held in Đà Lạt, Vietnam, last October when the participating countries were ready to go into the second reading of the Single Draft COC Negotiating Text in 2020.

It is scheduled that on July 1, there will be an Asean-China Senior Officials Meeting where a range of cooperation mechanisms will be discussed, including the specific plans for resumption of COC talks, according to Dũng.

All the latest developments surrounding the South China Sea might also be on the agenda at the meeting between Asean leaders and partners, Dũng said.

Aside from the main topic for the summit, which would likely be dominated by COVID-19, there would be always room for discussions over contemporary developments as well as current regional and global situations, Dũng said, adding that “no one will shy away from these issues”.

China recently intensified their military actions in the disputed waters, while on the diplomatic side, the US has submitted note verbally to the UN challenging China’s expansive and illegal claims in the resource-rich sea, joining the opposition conveyed by Malaysia, the Philippines, Việt Nam, and Indonesia.

“Everything that happened will be on the table,” Dũng said.

Strategic competition between powers, particularly between the US and China recently, had caused global tensions, “awkwardness and dilemmas” for many countries, including the Southeast Asian regional bloc, deputy minister Dũng told the press.

When the major powers of the world split over stark differences, it might force countries to take side, the Vietnamese diplomat noted.

However the stance of Việt Nam, and likely that of all of Asean members, had always been clear and consistent.

“Asean will not take any side, but will prioritise its own interests,” Dũng said, stressing that Asean has its own viewpoint on regional and global matters.

He cited the adoption of Asean Outlook on the Indo-Pacific last year as an example of the regional bloc’s charting its position on the US-led initiative in order to strengthen its central role in the region.

“I believe this spirit will continue to be demonstrated at the upcoming 36th summit and the 37th summit in November,” the Vietnamese diplomat commented.